There is a lot of interest these days in the classical novels in the media and on tv. With the screening of the new film "Becoming Jane", Jane being Jane Austen, even more so. 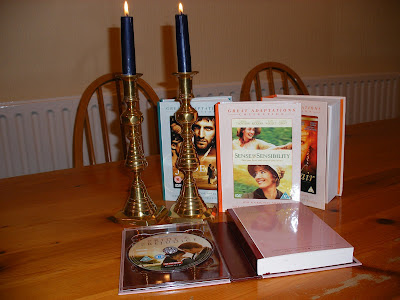 I have fallen in to that same trap myself. Having seen most of them on video or tv and read many of the books years ago, I thought I would like to read them all again some time. To this end I ordered and received the beginning of a new collection for my library. Each novel in this collection has an accampanying DVD. The films are modern adaptions. What shall I do first, read the books or watch the films? Usually I prefer to watch the film before reading the book. If I read the book first then I find the film disappointing as it is not usually possible to convey all the details of a book onto film. The only draw back to this is remembering the film setting when reading rather than relying on one's own imagination.

Two books that stand out in my mind where I was disappointed seeing the film after reading the book, were Chocolate and Captain Correlli's Mandolin. This latter one could harldy been seen as the same story. There was just so much in the book and so little in the film. As for Chocolate, the film was in many ways so unlike the book and I understand this was because of not wanting any insensitivity towards the Roman Catholic Church. The "baddie" in the book being a priest, but in the film the Mayor. So just some more to add to my list of books and films waiting to be read and watched.

Chocolate is one I have been meaning to see for a while...must get to it! Nel

I usually like to read the book before I see the film then I can see how it was adapted. Sometimes I hate the way it was done and sometimes I like it and sometimes well it is just so completely different you wonder why they bothered to buy the rights.

I usually only read the books as the films so often have disappointed me. I rarely watch television or films anyway, I need my time for books :-)

This is my first visit here, and I enjoyed the stroll through your spring garden. My mother is a great gardener, but I've never had the opportunity to keep a garden besides some container flowers and herbs, so I enjoy other people's gardens. Thank you for the tour!
As far as books and their film adaptations are concerned, I usually like to read the book first, to let my own imagination be unperturbed by other people's visuals. I expect films to be different somewhat, and don't mind to much unless it puts the story into a whole different context. Two films come to mind, that I enjoyed in their film versions, first "Breakfast at Tiffany's" (which has an ending far different from the book), and then Henry James' "The Europeens", where the scenes play out over a glorious New England fall, while James set it in late spring.
Great readings and film watching to you,
Merisi