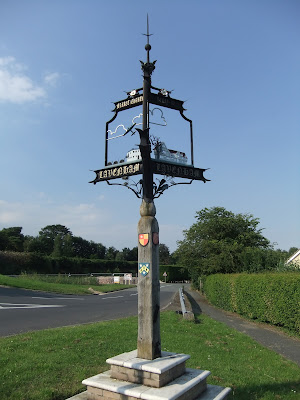 My last post on Lavenham  - begins with the village sign - I bet you are glad that I did not post all 500 photos! Don't panic I still have many photos from the places around that we visited. 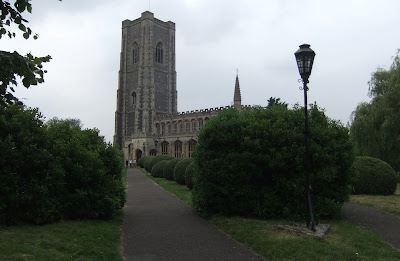 I'll finish this visit to Lavenham by visiting the Parish church. Built around 1485 it is an example of a splendid late Medieval wool church, boasting a wealth of beautiful carvings in oak and stone, two rare and historic parcloses, and fine Victorian stained glass windows. It records the wealth of the 15th century local wool cloth industry and thanksgiving for a Tudor victory at the battle of Bosworth.
John de Vere, Lord of the Manor at Lavenham, was a commander in the Duke of Richmond's winning army against Richard III at the battle of Bosworth in 1485. Richmond became King Henry VII and de Vere (13th Earl of Oxford) came back to Lavenham, deciding to build a new church helped by Thomas Spring II. 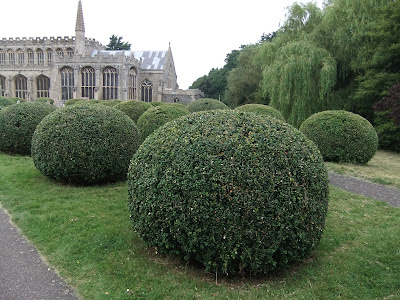 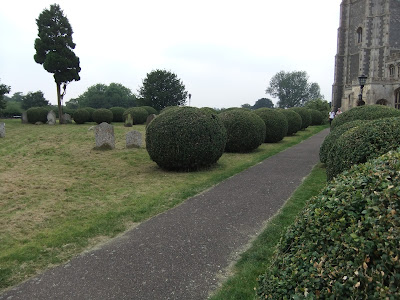 The trimmed Box hedges are quite impressive 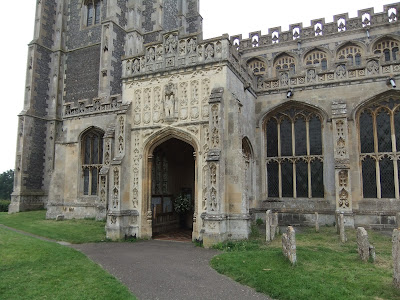 The exterior showing much of the history in the architecture 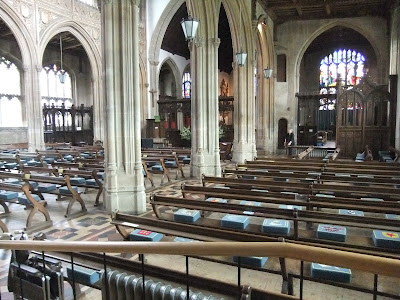 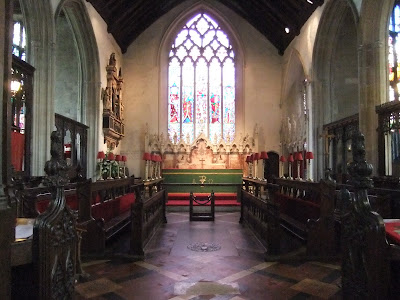 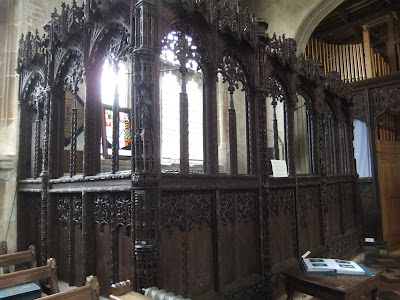 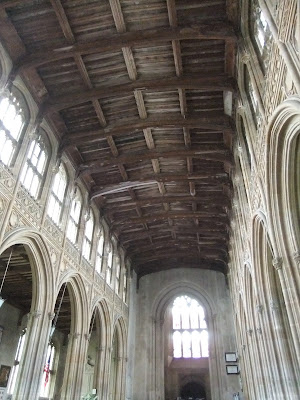 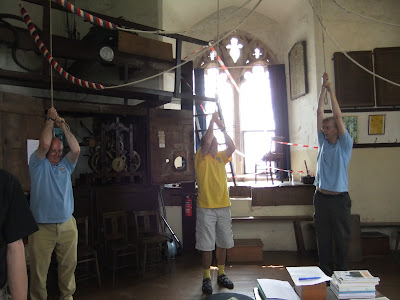 We visited the church a second time on the day that the tower was open to the public.
I have never seen such a tight and narrow spiral staircase. Someone has to stand at the bottom and be in touch by 'walky-talky' with someone standing not only at the top but at every stopping off level as it is not possible for anyone to ascend the steps if someone is coming down.
I found it quite claustrophobic but here we are watching the bells being rung up the first 70 steps 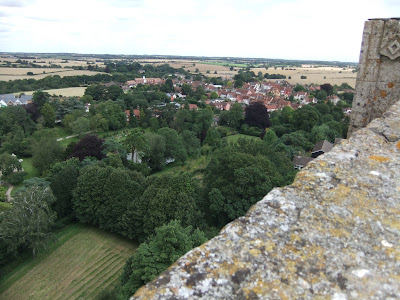 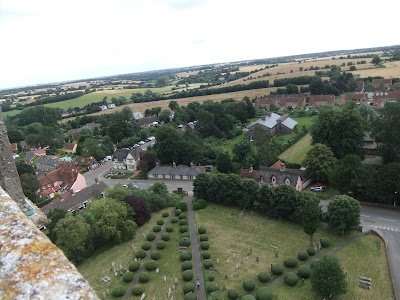 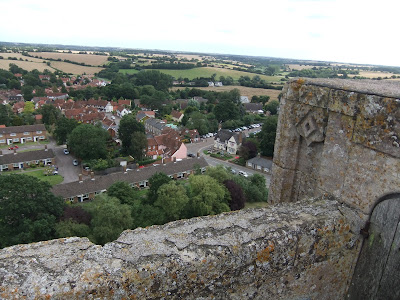 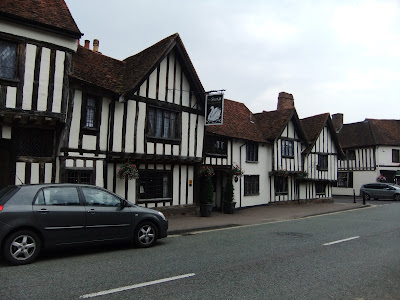 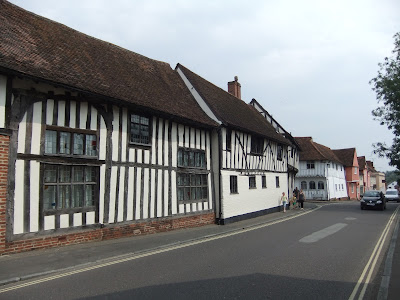 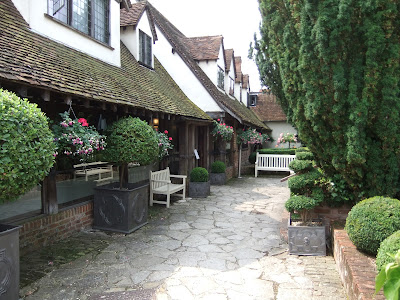 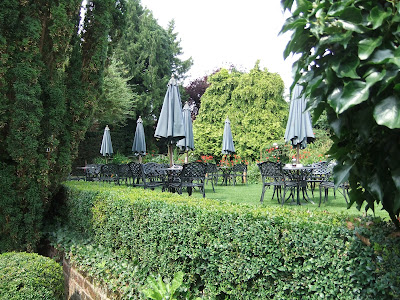 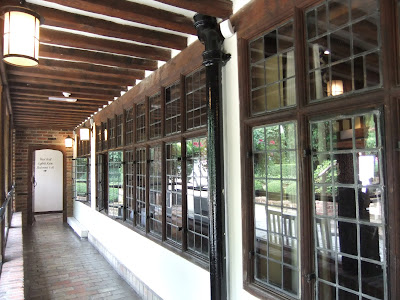 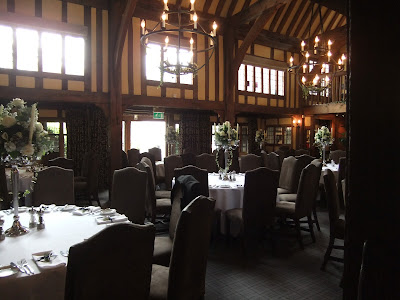 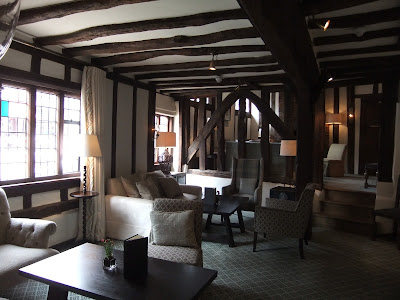 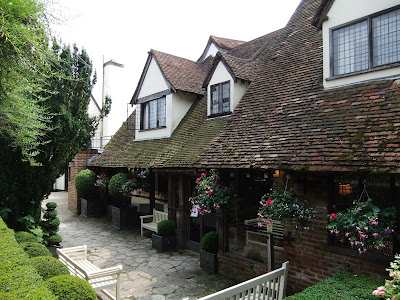 So goodbye to Lavenham

What a rich history you have there. My two brothers-in-law came to visit... They live near Bury St. Edmunds. My Hubby was trying to impress them with something really old - from the 1800s. LOL
Anyway, we had a lovely time with them.
Thank you so much for sharing your photos. I could see all 500!
Hugs

Just reading about the spiral staircase has me in a panic, I couldn't manage to go up there. Beautiful church though, so much detail. The village sign is very elaborate too. Lavenham does look picture perfect

This was such a treat. Bosworth, I have heard of that battle. Maybe the Churchill movie. You were very brave to climb that tower. Beautiful views. If I were in England I would love to stay at the Swan Hotel. Fall is here and the leaves are starting to change colors in Maine. I am still having a time with my balance. Going to class at hosp. Be well and best wishes to you and family. yvonne

I'd never get enough of our village. It has been a delight to see it through your eyes. Thank you.

The church is beautiful and I love the view of the village from on top.

I really enjoyed this tour. What a lot of preserved history in your country. I'm afraid I would have trouble with that stairway.
Balisha

What a beautiful church. I can't imagine being wealthy enough, as a private citizen, to fund something like that.
I liked the view of the neatly trimmed boxwoods from the top of the tower. Good for you for climbing that narrow staircase.

So you climbed all those stairs! I am impressed. (No, I would have passed and missed a wonderful experience. The hedges look wonderful from the ground, but spectacular from way up there.) All good things must end, though I know that you'll have us off somewhere very soon.

I'm so glad you showed us the village sign...what an interesting work of art that is!

It would be incredible to be able to visit all that history whenever one wishes instead of having to fly across a continent and a huge ocean first!

Your pictures and story are just wonderful, Barbara. However....the words about the staircase have me perspiring at the the thought. The view is spectacular from the top.

Have just been catching up with all your Lavenham posts and the super ones of the grandchildren and even you trying out the scooter!
Lavenham looks a blissful place for a relaxing holiday with plenty of history and plenty of excellent looking cake.
The church looks outstanding --of course the wool towns were extremely wealthy at the time.
I would not have managed the narrow stairs.
All best wishes to you and Alan.

Beautiful place! I love your photos, such good composition! Your church and village pictures are really fantastic. Thanks for stopping by. And yes, our yard is a LOT of work..Christine

Thanks for posting, Barbara! Beautiful gardens, interesting history, but oh, the staircase! You are truly a woman of great faith. When I was 16 a friend let me climb a ladder up into the steeple of a church in Newburyport, MA. The view from there was worth the frightful climb but that experience and climbing a bit in the Statue of Liberty, give me first-hand knowledge of why you felt claustrophobic!
Gracie :)

God Bless you Barbara and Alan, thank you for sharing a bit of history with us. Such a beautiful place, so glad you get to experience it firsthand. Blessings, Trisha