The Sound of Heaven 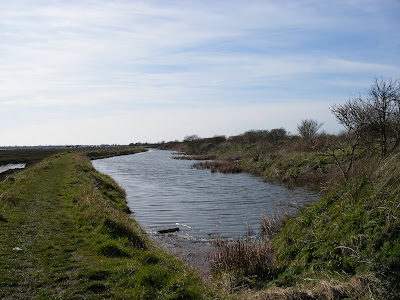 As many of you know we have spent a lot of time at Leigh-on-Sea over the years staying at our friend's home overlooking the Thames Estuary. Whilst walking out on the marshes one day my ears picked up a sound on the wind. I stopped and listened and although I did not know what it was, I was drawn to the sound. These marshes on Two Tree Island out in the Thames are often deserted so it is not usual to hear anything more than the wading birds chirping in the marshes or Seagulls flying overhead.
As we began to walk in the direction of the sound I realised that it was human voices I was hearing. These voices were raised in song and I became determined to seek them out so quickened my pace. 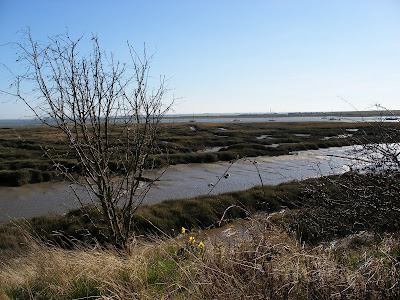 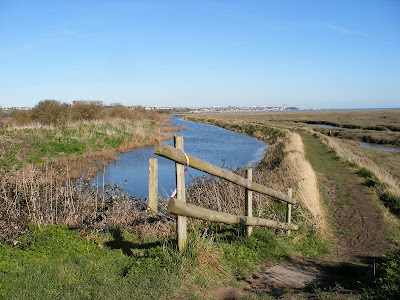 As we approached the above steps it sounded like a choir. We could see nobody but the sound was getting nearer. Angels singing in tongues is what it sounded like in that deserted place.
Suddenly all was made clear. Through a gap in a hedge we could see many people and a rainbow of colours. We had come across a large group of people from Africa - all in national dress singing their hearts out.
In joining them and chatting to them they told us that they came every year (hosted by a local church) to worship in the Thames Estuary and pray for our country and particularly London our capital. I always remember the sound and the sense of heaven whenever I walk out on those marshes now. It was one of those memorable moments.
Posted by Barbara at 17:00

What an amazing post.
So haunting and lovely.
Wishing all your family a most joyous Easter!

It gave me goose-bumps as I read this and imagined what that must have sounded like. I'm homesick for heaven as it is and long to hear what angels sound like singing praise to the Father, joined by all of us.

What a treasure experience! And a humbling thought to know they were praying for your country. Your photos and description almost let me hear a bit of the sound of Heaven!
~Adrienne~

I can imagine how gorgeous that must have been. How blessed you were to have come upon them at just that moment.

Thanks for sharing it with us. Beautiful place to be.
Balisha

Barbara,
What a delightful story,
I wish we were neighbors. You had me going for a moment. GHOST"S I was thinking...
I was happy for the ending..
Yvonne

Barbara,
What a delightful story,
I wish we were neighbors. You had me going for a moment. GHOST"S I was thinking...
I was happy for the ending..
Yvonne

What a beautiful sound that must have been. That is a memory that will never leave you!

Barbara, I love the image you are painting of that great day when we will see and hear choirs from around the world.

What a wonderful, God timed experience!!!!

What a great experience that must have been.

I do love how sensitive you are to the heavenly hope we have in Christ. Those voices in song can't help but make us think of when we will all join in song together.

What a wonderful and special moment. I think when someone hears prayer in song it speaks to something in them when they are a Christian and draws them together. When Bishop Justin from Maridi in Sudan came to our church years ago you felt him before he came into the room. So uplifting.

Darling popped in to wish you and your family a joyous and blessed Easter.

Thank you for sharing this special moment, and have a joyous and blessed Easter, Barbara!
Blessings - Beth

What a joy to hear then get to talk to them. Wonderful moment.
Have a peaceful Easter Day!
Bunnie hugs from our door step.
Patsy

What a lovely story Barbara, and an amazing moment you all had. I adore those moment when we seem to get a little glimpse of heaven on earth.

Imagine those folks coming all the way from Africa to pray for your land and city! God Bless England!

What a beautiful experience - made even more so by the unexpectedness of it.
How wonderful too, to know they come every year to pray for our country. How we need those prayers!

Wow, these pictures are so lovely! Thanks for sharing with us. Glad you have had such a lovely time. Must have been truly a very memorable experience. Take care and have a very blessed weekend and Lord's day!

What a wonderful thing to have experienced!