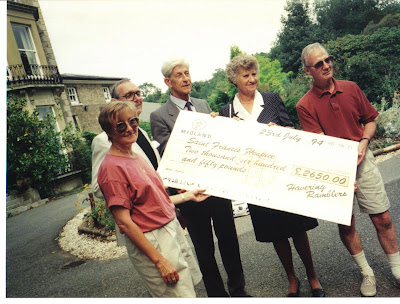 Having just said goodbye to my house guests who were in this area on a Prayer Walking mission I got to thinking of all the different walking we have done over the years. During the 90's for quite some years we were involved in Charity Walking.

This was a ramblers group where not only did we walk for fun but we also raised lots of money for local charitable organisations. The above photo shows us handing over a cheque for £2,650 pounds to the Matron of our local Hospice. The man you see in the grey suit was the organiser and visionary behind these walks. We would walk for anything between 6 and 10 miles and he would arrange refreshments half way, and also because we were walking for charity, at times managed entry to many interesting places on the way that were not open to the public.

We raised money by giving a donation at the end of our walk. Over about 10 years over £75,000 pounds was raised this way. The gentleman on the left of the picture is Roger Ro*yle, ex- Chaplain to E*ton College and a television celebrity at the time. Alan and I are about 15 years younger of course!
The longest walks we did were special whole day walks once a year. The longest being 33 miles. Alan managed to finish this one running, I dropped out after 18 miles and our daughter Janie dropped out after 12 with the largest blisters that I have ever seen. Our walks were always cross-country and often hilly so not for the faint hearted.
Posted by Barbara at 11:32

You and I have many things in common, Barbara, as we are both so aware, but walking for charity is not one of them. What a wonderful accomplishment and thing to have done. Thanks for sharing and my learning yet something else amazing about you two.

I'm very impressed with your 18 miles! Good for you!

Barbara,
That was really a fantastic thing you did. It is healthy for you too. I have a hard time doing 2 laps on my treadmill.
Hoping to do extra every day...

Barbara, That was really a fantastic thing you did. It is healthy for you too. I have a hard time doing 2 laps on my treadmill.
Hoping to do extra every day...

That is a great way to keep slim and help other people. What fun!
Patsy

I have always thought walks for charity were a 2fer. Money raised and health enhanced.
While I never participated as a walker, I was involved in many walks for charity as organizer, volunteer at water and snack stations, and general dogsbody. I'ts nice to hear about how other's give to the Lord.

That is a wonderful way to earn money for good causes...and you certainly did.

How wonderful you could combine pleasure with charity too. That is a great deal of money that you raised. I love to walk but have never done anything on that scale and in the past few years have done really very little at all.

You and your family have done a great thing to raise money for charity! I see in the picture, money was given to hospices--working in a hospital I receive many calls from patients who use hospices and it's good to know people support them.

Have a great week!

18 miles! That is a walk and a half...but a wonderful way to raise money for charity.

we used to do prayer marches, which
our children loved.

but hey were not nearly as long as
yours!

have a lovely weekend!

It's wonderful that you raised so much money for good causes. My feet winced at the thought of your poor daughter's feet though. I hope she recovered well.

That is a lot of walking -- and all for such good causes. Way to go!

I really admire you! Also this keeps one younger by far!

That is some serious accomplishments. Way to go! And good for you on so many levels too. :)

You're a better walker than me and just a big thank you (again) for having them...they loved being with you...you know who I mean!