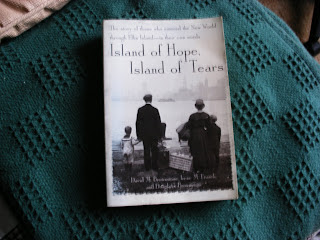 Thinking of my recent post on Liverpool, one of the things I mentioned was the fact that many European immigrants to the U.S.A. left from this port, it reminded me of a book I recently read.

Island of Hope, Island of Tears by David M. Brownstone, Irene M. Franck, and Douglass Brownstone. I bought this book from a secondhand bookstall and found it fascinating and traumatic in equal measure.

Between 1892 and the early 1950's nearly fifteen million people streamed through Ellis Island in search of a new life. Though it closed as a federal immigration station in 1954, the landmark island was restored and reopened in 1990 as a museum - thus preserving the heritage of 100 million Americans who can trace their immigration roots there.

Island of Hope, Island of Tears tells the stories of these immigrants, largely in the words of the extraordinary men and women and children whose epic journey to America led them through the portals of Ellis Island. Coming primarily from Southern and Eastern Europe, and from widely diverse backgrounds, the immigrants represented in this remarkable book recount the adventures with dignity, wit and honesty. Some immigrants relate each step of their passage to America. Others highlight key events.

Among the dozens of narrators there is a Greek boy forced into the Turkish Army at 15 who escaped to America with the help of the Russian Orthodox Church, a Polish girl who made the harrowing journey from Russia only to have to flee again from a 'white slaver' and a Czech woman who fooled doctors into letting her travel and join her husband despite being 8 months pregnant.

There are many photographs and it is a rich history of the people whose hopes and dreams helped to forge America.
Posted by Barbara at 21:07

Barbara,
Thanks for mentioning the book...I haven't read it but would like to....

Thanks so much for mentioning this book! My parents both emigrated from England and have their names on a wall at Ellis Island. I am always looking for unique birthday gifts for them and I think they would really enjoy this book.
Cheers!

I just tagged you for a book Meme :o)
Susan

Hmmmm, maybe I'll add this book to my history list for this year. I've heard of the book, but I haven't read it yet. Thanks for the idea!

Yes, such a lot of history with Ellis Island. My Liverpudlian great-grandfather arrived via Boston in 1905 or so. He was quite a character...left behind a wife and children (I only hope that he was divorced, but we're not all that sure), married a woman named the same as his first wife and proceeded to give all the same names to his American born children as he had to his English ones. Oh dear!

My daughter is in NYC and is planning a visit to Ellis Island while she is there. I will have to send her your post. Interesting.

Hi Barbara, interesting reading as always. When my family emigrated to England in 1956 we left London on the Queen Elizabeth and went in through Ellis Island in the USA. We then caught the night train up to Toronto which was our destination. We did get to stay a day in New York seeing the sights with a relative of my dad's. Lots of memories.