A few more Cotswolds posts before I have finished
This is the town of Evesham, gateway to the Vale of Evesham
not strictly the Cotswolds but just about 3 miles over the border so as we visited while staying in the Cotswolds I will include it here 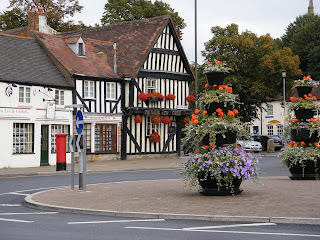 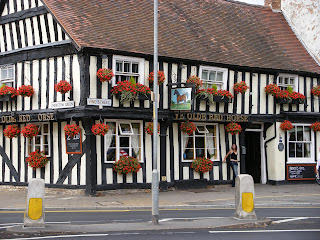 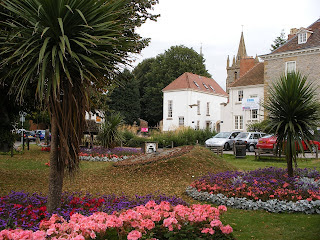 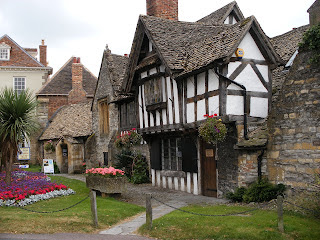 The Almonry - medieval home of the Benedictine Almoner who was responsible for the distribution of alms to the poor pilgrims and inhabitants of Evesham during the 850 year lifetime of Evesham's Abbey
It now houses a remarkable collection which takes the visitor from the earliest days of the Vale, when hippos roamed through swamps, up to the second World War. 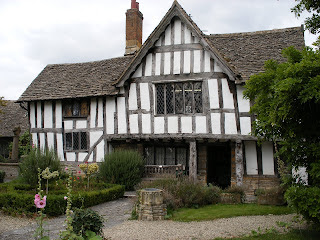 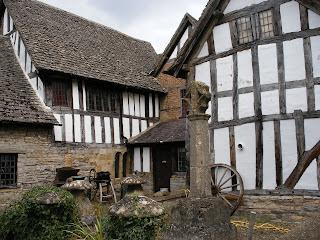 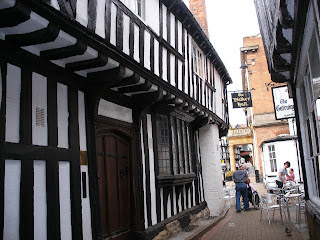 Medieval houses and shops in the town 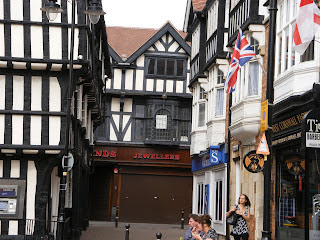 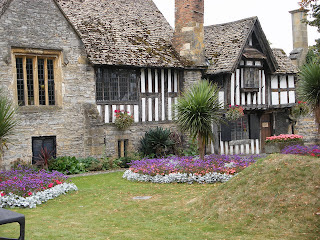 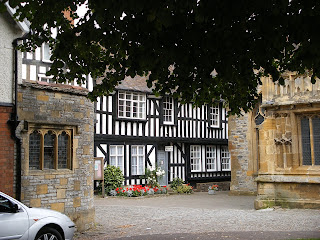 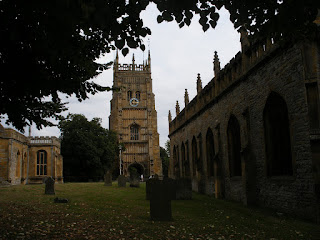 There are 3 ancient churches on this site
Legend tells of the swineherd Eof seeing a vision which led to the founding of a great Abbey around the year 700 A.D.
The Benedictine Abbey of Evesham which was subsequently founded, grew to be one of the largest and wealthiest in England before it's dramatic closure in January 1540 by
Henry VIII
All that remains now is the Bell Tower 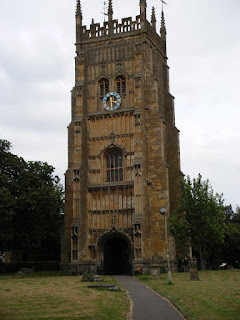 I used to be a Campanologist (Bell ringer) so this is me being allowed to ring one of the bells
in this Medieval Tower
Some facts about bells
The clapper hits the bell at around 600mph...
English bell ringing is older than cricket...
1350 First Diatonic bells cast (Doh Re Me Fa Soh La Te Doh)..
1590 Simple "changes" first rung and still rung today..
Full Wheel - the modern way of ringing - the bells are rung from and upside down position at the top of the wheel
This is unique to the UK
A bell quadruples its weight by centrifugal force when rung
A collection of bells being rung is called
a "Ring of Bells"
A "Peal of Bells" must exceed 5,000 changes
The largest bell is at Liverpool cathedral - 82 cwt.
Heaviest bell is always the Tenor
Lightest bell is always the Treble
Total weight of bells in this tower - 8 tons 10 cwt.
Posted by Barbara at 13:31

Wow that was a wonderful post! lovely photos! Thank you for the tour and the history! My family on dad's side is from England and lived at a place called King's Bromley Hall but I don't remember right off hand what area it was in! LOl!

I love your facts on the bells.
May the bells of happiness peace love and joy ring for us all.
Love you
Jeanne

That little town is so quaint, the flowers were fabulous. Your post brightened my day!
P.S. You're entered in my giveaway.

I love the photos and the tour. The bell ringing was a real pleasure to read about. Do the bells hurt your ears when you are ringing them?

I wish you all a very happy Thanksgiving. connie from Texas

Thank you for a lovely post. I found the information on bells and bell ringing fascinating. We so rarely hear a bell ringing anymore. I miss it, too.

Gorgeous photos...don't remember if I have have been to Evesham...but I do love the Cotswolds...
Deby

Evesham's medieval houses reminded me of Sally Lun's in Bath. (I may have misspelled the restaurant name). What an interesting history; how will I ever be able to choose where to visit with so many places just in the Cotswolds?

What a wonderfully preserved village. I've always wanted to hear a concert by the bell ringers in England but, so far, it has never happened.

I always enjoy your pictures. I'll probably never visit, so it's like a little vacation for me. ;0)
Thank you for the Thanksgiving wishes!
Blessings,
Karen

Barbara,
I would love to have a full week in the Cotswolds, but we are going to be in all of England only two weeks.
We are at 35 degrees north latitude so it's not surprising that we have camellias blooming. It almost never freezes here in this valley. The exception was last winter when our blueberry friends lost their whole winter blueberry crop to the freeze.

No firm plans yet. Chaplain Dan leaves the country in early December and then he will take R&R about six months after that. We expect the trip to take place in late June/early July.
Four years ago we were in England the last two weeks of June and we had mostly great weather, the summer flowers were blooming and the roses and Kew Gardens and Mottisfont Abbey were perfect.

Fascinating information about the bells. I love to hear them ring when I'm over there, and seeing your pictures just makes me more eager for vacation in May!

Your photos really make me want to travel again, beautiful.

Thank you for those fantastic facts about bells, very interestting.

It is all so perfect in the spring/summer isn't it! Beautiful photos, Barbara.

What a treat to see your pictures of Evesham, lovely ancient town. That’s a great shot of the Red Horse Pub bedecked in hanging baskets full of geraniums. Interesting info' about the bells.... you look a great bell ringer!

We’ve been back to Winchcombe twice in the last couple of weeks for dental appointments, I thought of you as I walked around, particularly when I was standing outside The Bakery!!!!

Thanks for your recent comment. I’m back on track now and desperately trying to catch up with everyone, but thanks for the nudge, I need it sometimes..... All the Best - Marion

Barbara,
What a talented lady you are! I once saw an episode on Midsomer Murders with Chief Inspector Barnaby about bell ringers being murdered. I was very interested in the bell ringing part.....now I have a bell ringer for a friend.....

As we celebrate Thanksgiving tomorrow, I will be thankful of my friends in faraway places such as Romfort, Wales, Scotland, France, Australia, Canada, Netherlands, Germany and many others places......and most certainly for those in the good ole USA........

Hi Barbara,
We'll be in various parts of England and Scotland in May. I'm most certainly hoping to meet you and Linds somewhere along the way. I have Linds' email address, but not yours. Would you send it to me so we can stay in touch on the scheduling? My email address is on my blog.

I like these lovely houses and the pictures of Evesham. They make me want to visit this part (Cotswolds) of England next time we are in your country. Thank you for sharing!