I just wanted to say a big Thank You
to everyone for the prayers, best wishes and sense of support during what has been quite a difficult week but nothing compared to what some folk are having to deal with I know

Alan's surgery went well and he arrived home looking like a 'mummy' with his legs and feet bandaged and unable to even put on a pair of slippers. He then had an unscheduled visit to the hospital the next day as there was much bleeding and leaking from the site of the skin removal for the plastic surgery
The hospital is a specialised unit so is some distance away
He got home 10.30 pm and in no time the different kind of dressing was slipping down his thigh and exposing bare flesh so
back to the hospital again the next day
After another long wait the third dressing seems to have worked
so we await his scheduled visit next Thursday
He was meant to keep his feet higher than his heart for 48 hours but some hope with the hospital trips
He discarded the foam that was supposed to protect the bandages on his feet, but instead were breaking up and making a mess on the carpet yesterday, which enabled him to wear his slippers
He has to keep his legs up as much as possible but able to get around too now which means he is back to filling and emptying the dishwasher!! 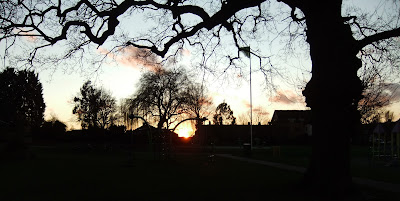 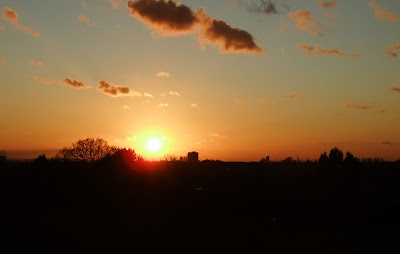 Sun setting in the park this week

Will be back to visiting everyone ASAP

It is good to hear that all went well with the exception of the bandages. Thank the dear Lord for his many blessings. I guess you just can't keep a good man down...dishes of all things. I know that lying a bed is not a good thing and we are thankful for being able to do even the most simplest of things. Your sunset picture is beautiful.

Oh dear poor Alan! Do hope it all heals up as intended and that he is OK in the end! Glad he is at least able to load the dishwasher now. Lovely pics.

Will continue to pray for both of you.

Sorry to hear you had so much trouble with the dressings. I don't think the Doctors think much about how they will work. Sounds like Alan is one of those unstopable forces. Wishing for continued healing.
Hugs!

Praying for Alan and you!

So glad for this update. I've been thinking of you this week and wondering how it all went. Hopefully the worst is over and healing will continue.

God Bless You, Barbara, you've left us with beautiful pictures, even with everything you are going through, you are still thinking of others, a perfect picture of God's love. Hugs and Prayers for you and Alan.

Alan is back to chores already? That's a good sign. Nothing stops him.

This is a very stunning sunset...I envy your long views so close to your home that you can walk there.

Have a good week, Barbara. Hi to Alan too.

Having been away, I am still catching up. I do pray that all will go well. It sounds as though you have both had a trying time.

I hope the rest of his recovery goes a little more smoothly.
Gorgeous sunset.

Hopefully, Alan will be back to normal soon. I had basal cell carcinoma removed from my arm and thigh several years ago--all is fine now. His I'm sure is much more extensive than mine was as I just had the work done in a dr. office.

Glad to hear the setbacks are so minor. Make him behave, so that you can both get back to your more ambitious activities.

Thanks for the update.

I've been praying and will keep praying. So glad to hear things have settled down and Alan is on his way to recovery. Praying for you, too, my friend - this is never easy on the dear one who must be the caregiver.
~Adrienne~

I hope that he starts to heal nicely.It must be hard to have to go back to the hospital a couple of times. I hope that things get better real soon.
Balisha

Will keep him in prayer for a very speedy recovery! Blessings!

And meant to add--thinking of you too--as I'm sure this has been difficult for you!

Barbara,
Thinking of you and your dear husband. Praying he heals and all is well.

Sending well wishes to you,
d

Oh dear. So much for keeping those legs elevated!! I hope the rest of his recovery is uneventful for both of you.

What a time of it you are having!
But provided Alan is generally improving I suppose you will just have to survive it.
Thinking of you and sending all best wishes.

Fingers crossed for you both!

Such a challenge to remember to keep your legs elevated, especailly at first. Alan looks in such terrific shape, and that will be a boon with his healing.
All the best to you both
xx
julie

Barbara, you have much too much going on to fret about visiting me. Here's a complimentary reprieve!

Why is it that just when we think a thing is sorted, it goes awry? As Gloria Gaither says "Always look for God in the interruptions." I can't imagine what the lessons were with all this bandage trouble and the running back and forth, though I am very glad to know that Alan is doing a lot better as evidenced by returning to his chores.

Stopping by to catch up your blog. Sorry to hear about your hubby. Praying for a speedy recovery and that he'll be up on his feet in no time. I'm sure this has been a very difficult season for both of you, sending God's love and healing power your way guys.

Wishing you both a very "Happy New Year", with better health this coming year.

Oh my gosh, Barbara, I'm sorry that Alan and you had to go through such a stressful surgery. I am thankful, though, that you live in a country with good, affordable healthcare. I'm thankful that Alan's doctors know what they are doing and that Alan is able to recuperate at home with those he loves most.

Alan is very brave and so are you! Hope and pray everything comes back to normal very soon.
I have been through cancer with my mother and know that words cannot express what the patient and near ones go through.
I have noticed that at moments of great stress, we do get some superhuman strength to support us. I pray for all the best for both of you.
Love, Zafaran.