Stow-on-the-Wold is an ancient Cotswold Wool Town situated beside the Roman Fosseway and set on a rounded hill at the height of about 800feet above sea level. This elevated position and the effects of the elements have encouraged the creation of an enclosed town square. Iron Age people were the first to settle on the hill and there is evidence of earlier settlements in this part of the Cotswolds. Stone Age and Bronze Age burial mounds are common throughout the area.

The houses of Stow were built with the mellow Cotswold stone from local quarries. Some have massive internal oak beams from the days when Gloucestershire was covered in forest.

The Kings Arms is a good example of a coaching inn where the main entrance was through the arch leading to the stables. King Charles I stayed here at the time of the Battle of Naseby in 1645. On Digbeth Street stands the Royalist Hotel, said to be the oldest inn in England. An inn has stood on this site since 947 AD. 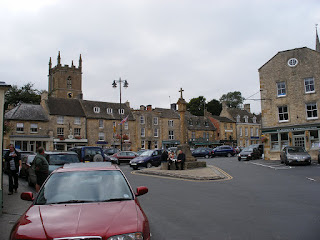 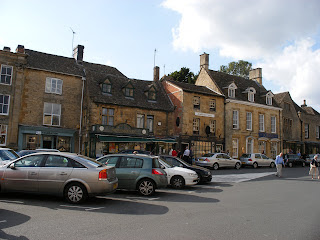 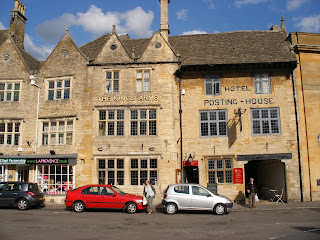 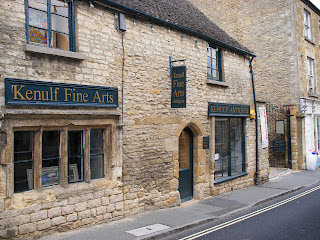 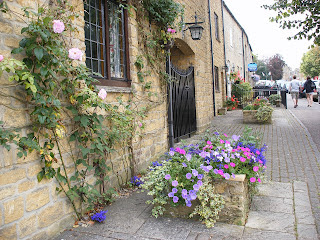 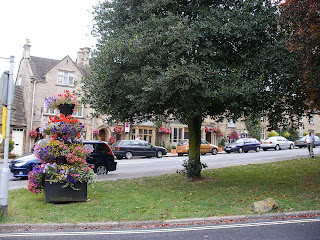 What a lovely place. Thanks.

ohhhhh....
When I saw this...I could have started crying...this is where I worked....this was my little town I drove to almost every day..and joined their little chamber of commerce..and got to know some of the local merchants and see...the Morris dancers...and...and...and...oh how I miss it ...I am going to show my dh when he comes home tonight...
Deby

What wonderful history. I wonder if you see people walking around talking on cell phones there. That would be a funny sight, old meets new. I liked the "flower tower" in the last picture.

Good morning Barbara (or I should say: good afternoon!)

I'm really enjoying your Cotswold posts and hope one day I will get to visit them in person. CT and I are talking about a 2009 visit for our 25th anniversary... My mind boggles at all the history - an inn on that very spot since the 900's - wow!

I mentioned you in my post today - but did not make a link to your blog (if that's ok I will go back and do that). Take a peek - I think it will be a nice little surprise.

I love visiting your blog ... it brings back such fond memories for me. And I am so enjoying your photos.

Barbara, my roomie has long wanted to make a trip to the Cotswolds. I think I shall save your entries for her perusal. Thanks for another informative and pretty post.

Barbara,
Another place to put on my must see list! How am I ever going to fit them all in, or choose where to go?
I love the mellow stones of the buildings; they are so much like Bath.
I, too, mentioned you in my post this afternoon and linked to your blog.
Willow

I've been there too! Such a lovely area filled with delightful villages.

I keep noticing the tiered flower displays...those are really spectacular. Have not seen anything like them here.

It's kind of fun to see the difference in history between our two countries. We think of the 1600s as ancient history. LOL!

Thank you so much for your kind comments at my blog. I am guilty of looking at the storm and the waves instead of at the Lord. Hence, I find myself sinking and fast. Lots of things going on with my parents...illness and life choices. Just the usual stuff of life. Thank you for caring and I may take you up on your kind offer one day!

Oh Barbara, I know all these ways you are gone, we stayed two times in Stow on the Wold.

Should I ever travel to the Cotswold area, I shall use your blog as my guide. Thank you so much for sharing your experience with us. :-)

great post :) I love that picture with rose on the wall. there is a common belief, that roses are so delicate plants, which is not true. if I look at that picture, I ask myself where from that rose takes all nutrients and where is the roots??? :)

Thank you for leaving a comment on my blog :) and greetings from a small garden in Poland :)