A Different Kind of Garden

My son's garden is certainly different.
From the initial planting in 2000 he has let it run wild apart from occasionally mowing the grass.
He is single and loves to travel several times a year.
It works for him and the wildlife. 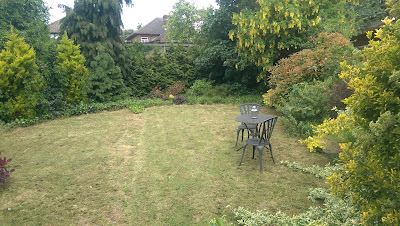 Photos a little hazy as passed along 2 mobiles, my i-pad and my computer!
I did take some lovely spring photos myself last year on my i-pad but of course lost them when i-pad was wiped. 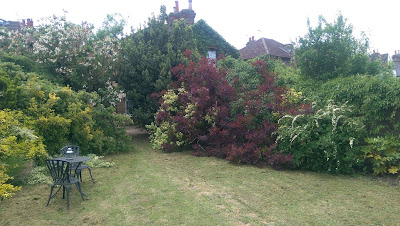 Even the back of his house is covered in ivy. 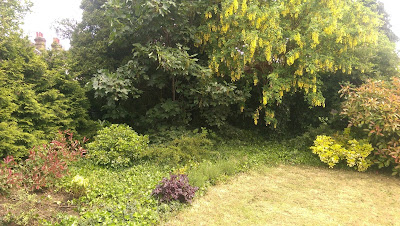 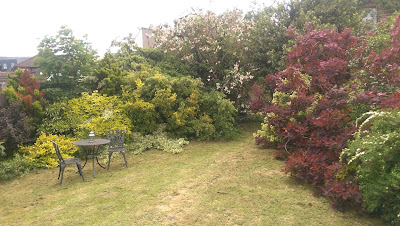 I was counting up the countries he has visited in the last 6 years - quite an achievement.
He goes to see animals, scenery, architecture and the local culture.
He has thousands of photographs and maybe sometime I could start a series of posting some if not too daunting.
He has given me permission to do this.

He began his journeying on an African Safari, and the following year climbed Mount Kilimanjaro (19,340 feet).
He likes to go off the beaten track rather than the popular tourist places.
From that time he has visited Ethiopia, Namibia, Borneo, Bangladesh, Peru, India, Laos, Cambodia, Kenya, Uganda, Rwanda, Tanzania, Botswana & Zambia.
He has just returned from climbing Mount Toubkal in Morocco and next week is off to Brazil for the third time to visit friends.

So sometime I would like to share some of his magnificent photos, his hobby being photography. Quite daunting as there are thousands.

Would love to see the world through his photography.

My garden has been quite wild and in nee of a little TLC. With a little bit of help it has been tamed back into control in the last couple of months.

One part of the garden will always be difficult, it backs onto a bridle path with hawthorn and ivy rampant. The hawthorn is a good burgler deterant so I will leave it be and work around it. We have a builder coming soon to sort out some walling, fencing, slabbing and building of the new shed!

I must admit that I like my garden to feel more natural than designed.

I like his garden. That golden rain tree is absolutely stunning!

Hope he loved Morocco!
What amazing travels he has had. Our daughter is a great globe trotter too.
We are getting a bit staid in our old age!
Warmest greetings from New York.

In spite of all that travel, his garden looks quite pleasant and inviting!

I would love to see some of your son's photos of his travels. His garden is nice and I'm glad he doesn't worry about leaving it to travel around the world. The garden will be there when he returns home!
~Adrienne~

It's smart of him to know his priorities and groom his yard for his absence during travels. I like it.

I wish my garden looked a fraction as well as your son's with benign neglect. You could start with his favorite locations and have him choose a few -- thousands is rather a lot to wade through!