Yes, I am still here but have not posted for a month nor hardly visited. This has not been intentional but as we all know 'life happens'. Talk about slowing down as one gets older, we just seem to get busier! Apart from that my i-pad and Facebook have played a part.
I need to rectify this with a few bits and pieces and get visiting you, my blogging buddies.
Where do I start - maybe with a photograph from the beginning of the year. 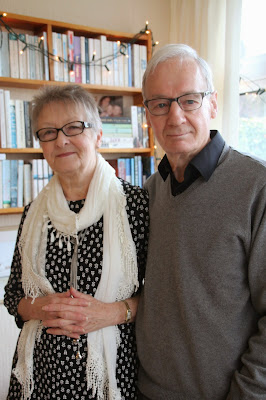 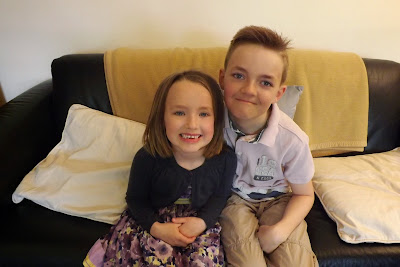 The Grandchildren are growing fast
Five and Eight here 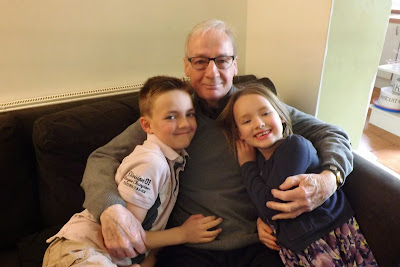 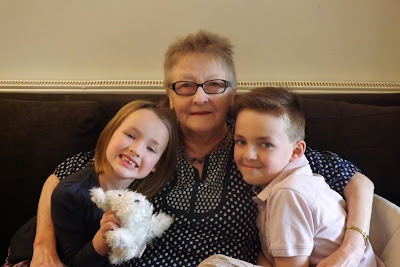 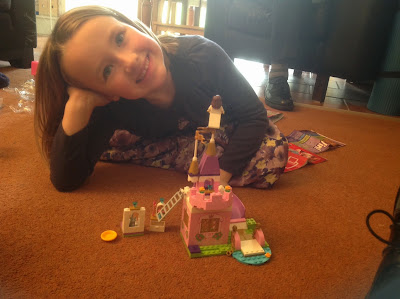 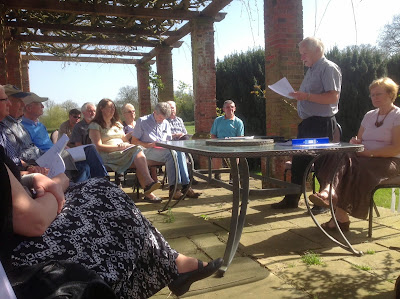 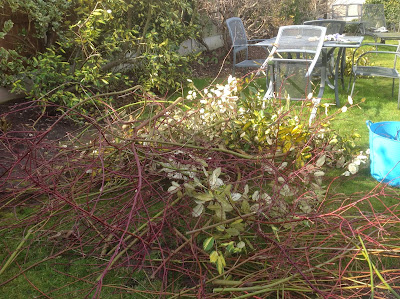 When pruning shrubs in March I began to think about cutting down on some more of the work in the garden (those who have followed my garden may remember that in the last two years we have removed some the larger shrub beds and replaced them with small island beds and planted new roses). I am looking ahead to the time when it might be more than I can handle. 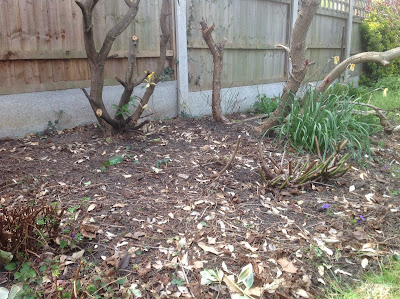 So decided  to 'just do it' rather than dither.
Hopefully soon this area will be dug out and grassed over. I am now looking forward to seeing this area opened up. It was hard to let go of the Smoke Bush particularly, but it had spread to it's limit of 16ft x 16ft and a lot of the wood was dying off. 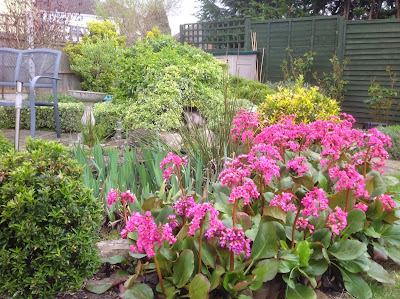 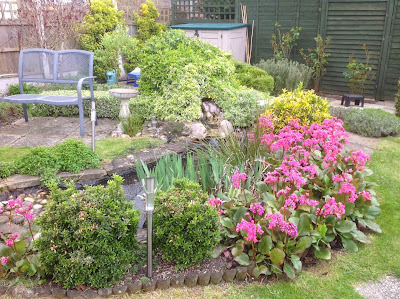 Still some Spring colour to enjoy 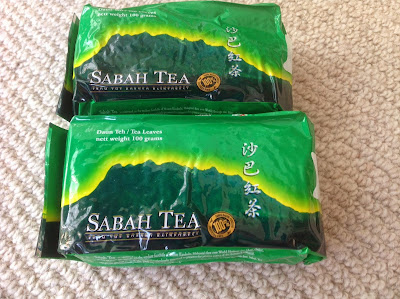 I'll finish with another tea note
My son just returned from his second trip this year and having seen how we enjoyed the tea he brought back from a tea plantation in Bangladesh in February, he brought some back from a Borneo tea plantation.
It's interesting to note the slight difference in flavour these teas have.
This is Sabah - the national black tea.
It is cultivated on the verdant foothills of Mount Kimbalu, Malaysia's first ever World Heritage Site.
Here choice tender leaves are carefully harvested and meticulously processed to preserve the pristine purity of the Borneo Rainforest.

Well I just realised that I have been blogging for 8 years Easter gone. To think that when I began I wondered what on  earth I would have to say!

Morning, Barbara!
So glad to see you back in Blogworld and so happy to see all your updates!
The children really are growing up very fast.
I'm heading to England next week and will keep you posted - hoping we manage to have a cup of tea!

You two look very happy with your grandchildren. They are so cute!

Well I figured that you were out straight. You usually are! Wonderful to see the photos of you and Allen and the grands who certainly haven't slowed down either. No need to visit me. I've not been blogging myself! =D

So nice to see you back! Life does get very busy at times.

What lovely pictures of you and your family. Life does keep us busy for sure. We were quite cold yet in April but the start of May has been quite lovely and I'm enjoying the warmth and getting out doors more and more. What a treat you have in such a great selection of teas. I'd never even heard of some of them. A very happy Spring to you, your gardens are still quite colorful for sure.

Happy blog anniversary, and so good to see you back! :-)

Love your garden stories, you sure have moved things around there over the past years! The grandchildren are sweet and happy joy, and I am a little bit envious of the good teas your son brings back from his travels. I am happy for you, though!
(At first I thought that last pictures was of two large mulch bags! ;-) )

So glad to see you, Alan and the children. Those are all wonderful pictures. The children are growing up so quickly.

The gardens grow quickly too. It is amazing how they can become "overgrown" in what seems like no time at all. The spring colors look so pretty.

You have been busy. Your grands are so handsome! Your garden border is so full and lovely with the pink highlights. Have a great week...

So glad you are both doing well. Same with us ,this age thing is the pits sure has slowed us down.
Staying busy I guess is the key to life.

Eight years - I have been blogging for eight years now too. I guess we have something to say, and something that others enjoy reading. I was glad to see a post from you this morning. Good luck with your garden. We are trying to create a garden at our new/old cottage - quite a challenge!

Happy 8th year Blogging Anniversary, Barbara! I'm so glad to have met you through this means of communication :) Your grandchildren [and mine] are growing delightfully as is your garden, and your tea sounds lovely and prompts me to stop typing and go brew a pot of my own! Blessings to you and yours xx

So wonderful to see all the family photos, Barbara. You and Alan are looking good and of course, the grandchildren are such darlings. How sweet of your son to bring back tea for you. Enjoy your garden downsizing - it's a good thing to plan ahead.

Hello Barbara! The grands look very happy to be with you and Alan. Congratulations on your blogging anniversary, and I'm glad you are still there. Like Merisi, at first I thought the tea was bags of soil or mulch. Thanks to your tea posts I'm realizing the world of tea is vast and one can experience all kinds of interesting flavors. Looking forward to your garden photos as we move into summer eventually and seeing your new garden plan. Hope the sunny days start sooner rather than later.

So nice to see you back on my Reader. You two look great!
We have slowed with the gardening, too, and look for ways to make it easier. Now he takes several times to cut the grass. Worst thing about it, it keeps on growing!
Wow - your grands sure have grown since you showed them last. (Just like our grass, I guess.)
Now don't be a stranger. We miss you when you don't post.
Hugs

How lovely to see a recent photo of you and hubby. The grandkids have grown so much, I remember them as babies.

You have a really lovely garden. I too am a tea lover and drink a lot of it.

Nice picture of you and the grandchildren, Barbara. We just had a do-over on our small front yard. I'm waiting for one more thing to be moved into it then I'll do a 'before and after' blog.

Now that is some tea bag!
It's so beautiful this week all I am doing is getting this acre clean and seeding, fert, and planting. I paint on rainy days, no time to do house cleaning. Golly at 79 I have really slowed down. Sending love to you Dear Barbara and Family.
yvonne

Your garden is looking lovely and what sweet grandchildren! You are blessed.

Lovely to see you back. Gorgeous photos Barbara.

I know what you mean about slowing down!

Ah, nice to have you back, Barbara! Lovely to see the grands again. Seems not all that long ago when you were announcing their births (!) yet here they are.

It's a shame we can't continue to garden in the way we'd like, keeping up with all that we've taken on. But you are right to dig right in and make a start.

It's good to see you here again, Barbara. I know how life can get busy but I loved the little recap of your days. Your garden has always inspired me. We are in the process of slowly cutting down on things that have become too much work. I'd rather be able to enjoy what we have instead of working so hard we can't do that. I always love seeing what you are doing.
~Adrienne~

I too was happy to see your post. You have such happy grandchildren. A blessing for you for sure. I know that ours are to us.

I always enjoy your blog posts and have really learned a lot about history in England and you have also taken me on an English holiday with your pictures.

I really like the photo of you and Alan, and the scarf you are wearing is looks beautiful on you.

Eight years of blogging is fabulous and you have touched many people.
Audrey.

Hello Barbara, lovely to see you and your family. I think it's so smart that you have started to think about the future like this. Much better to plan ahead than to let things become too much. Gardening is a journey and our gardens evolve with us.

I too have been extremely busy and I didn't manage to post for many many months! I am just returning to blogging and glad to know you are still actively blogging.

Your grandchildren are so lovely! Hope to catch up with you and other friends soon.

Take care and have a blessed day ahead.