Dare I say it! It has not rained at all today in my neck of the woods! 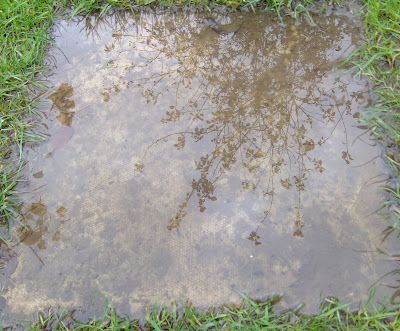 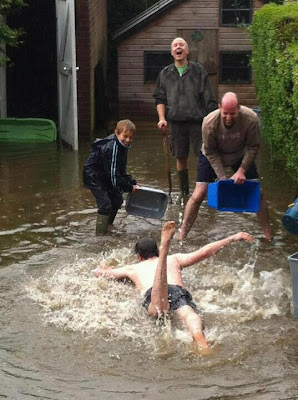 This is the garden last week of a couple from church who live just 7 doors down. Mine was certainly not as bad as that higher up the hill.

Our newspaper is describing the constant rain as having been positively Biblical. Floods have swept across Wales, Yorkshire, Dorset, Somerset and Devon . Some home owners in the North of England have been flooded for the 4th time in a month.

It is all the fault of the jet stream which marks the boundary between cold polar air from the north and warm tropical air from the south. This powerful conveyor belt of winds in the upper atmosphere that swoops our way across the Atlantic  bears much of the responsibility for whether we enjoy bright springs and balmy summers, or a soggy April followed by a damp May, June & July.
When the jet stream is blown by strong winds from the west, it heads north towards polar latitudes leaving Britain - safely insulated below it - in a region of relatively high pressure.
When the jet stream is weak it meanders like a sluggish river and dives southwards towards the tropics bringing us low pressure and we end up with weeks or months of cloud and rain.
Apparently it will begin to travel north next week 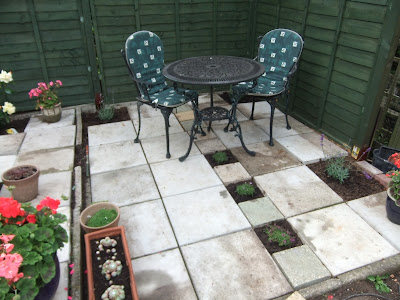 Due to the weather our bottom of the garden project is taking months instead of weeks. Still quite a way to go but it is progressing.
Here I am wanting to make a 'quirky' corner where the shed once stood
Quite a number of ideas floating around in my head 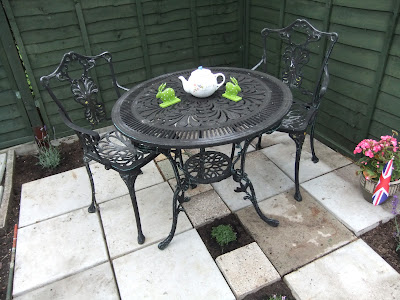 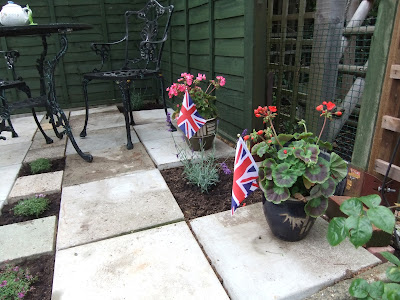 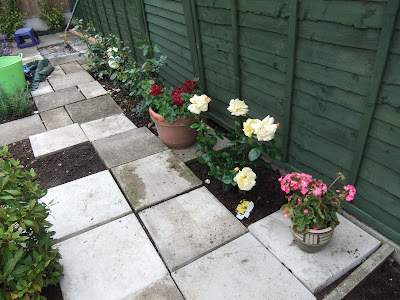 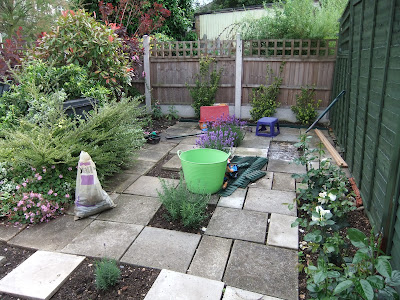 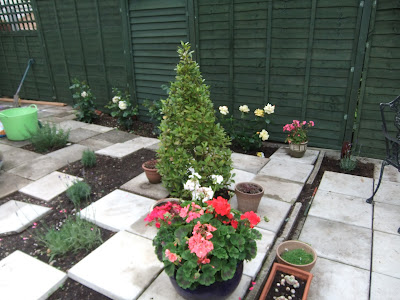 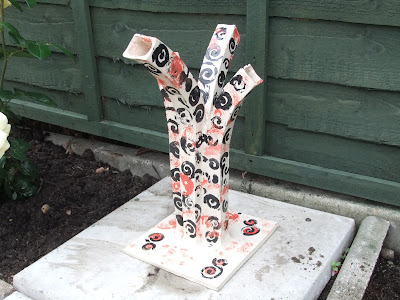 Now I wonder what you think of this?
I saw it in a charity/thrift shop and immediately knew I could find a place for it in my 'quirky' space. Alan said 'no way' , the couple standing next to us just smiled and the lady at the counter giggled so I duly left the shop.
Just 2 minutes down the road I told Alan I really would like it so back we went to much amusement for those in the shop 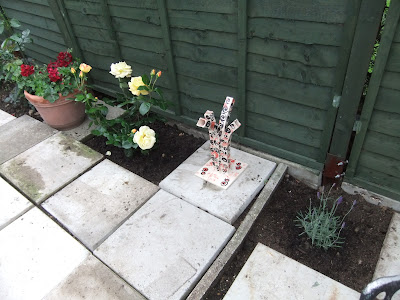 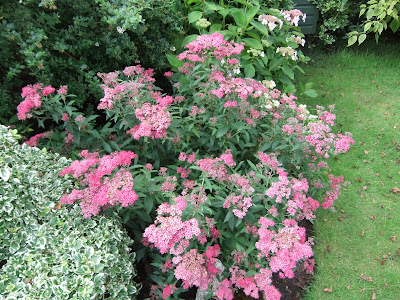 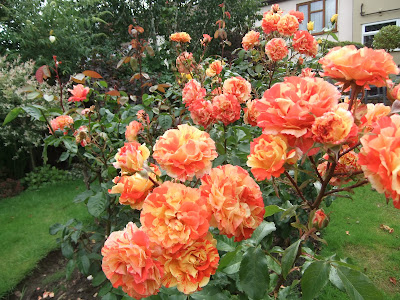 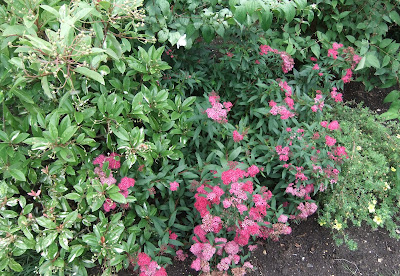 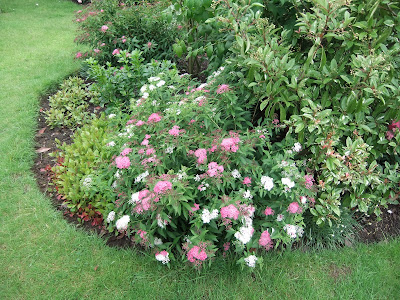 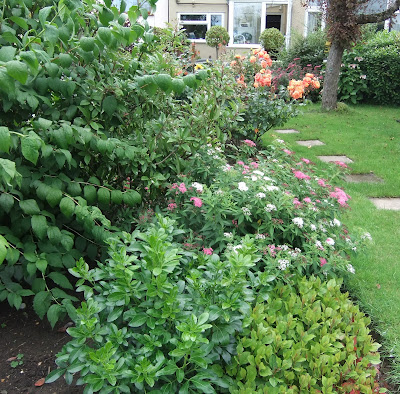 Some Olympic info. for next post before I continue with my Kent photos
Posted by Barbara at 20:10

I think we could all do with a bit of sun now. Despite the weather your corner is coming along nicely :-)

Those are pretty colors! Hope your relief comes soon.
Hugs

I do like what you are doing with the slabs and areas of planting.

Yes I agree we could do with less rain. Your garden is coming along nicely and everything is very green. I will be interested to hear your Olympic info and wonder if you are being restrcited where you drive as the time is getting closer. I hope you have some nice weather for your holiday.

I love the quirky piece in your garden. Whimsy is fun to indulge in small bits. Although your concrete pavers may not match, the effect of different tones is quite pretty. At first I thought it was intentional.

I hope, for your sake, that the jet stream departs for parts unknown as soon as possible.

Thank you for the information I have been requesting of Linds. ☺ I couldn't imagine why you were suffering all this nasty weather since I had long since stopped shipping any along. The Jet Stream! I am praying that it'll right itself and you can have a sweet end of July and a beautiful August and a gorgeous autumn.

Now I like your quirky piece. It's a conversation starter and it will tell the story of a lady who liked it very much and her longsuffering husband. Don't hit me! Hahahahaha...

What you're doing with the planting between the pavers is very nice. That must be an English thing as I've not seen it around here.

I'm loving how your quirky little corner is evolving. Now if the jet stream would just meander away.

I was a little stunned by the "object d'art" from the thrift shop but it quickly grew on me. I think it looks adorable in its special spot, Barbara. Be sure to post of pic with the terra cotta pots when you can.

It's so whimsical. I expect a fairy or two to emerge from those waving arms.

Our part of the world is the extreme opposite and we are experiencing drought conditions here. It's been very hot and dry. No rain for some time and that is not good. Whatever may be up with the jet stream I hope it changes and makes a difference here too. We need some of the rain you have thereI like your quirky garden ornament. I like a bit of whimsy in the garden.
Hope your weather improves and you get nice days for your holiday.

Wow, that is a lot of water standing about! That quirky object you bought looks like some kind of vase perhaps. Too bad it's not decorated in red, white and blue...you could put your British flags in each tube and have quite a display!

We are looking forward to the Olympics opening ceremony...

I like the way your neighbours are still laughing, despite the terrible conditions. It does get difficult trying to stay cheerful!
I think your quirky purchase is fun, it will certainly be a talking point!

Glad you've had a respite from all that rain over there. I like quirky and I'm glad you went back for your quirky purchase. Shows a fun side and your garden is lovely.

Your garden looks beautiful. mine is all brown now :(. We are having 100+ weather every day with no rain in sight. I wish we could all have that happy middle! Love your quirky little piece,

Here's hoping that the jet stream does move. You had winter flooding a couple of years ago, didn't you? I hope the weather patterns normalize soon.

I love those little open spots between the slabs for plantings!

Your garden looks fabulous-you can see all of the hard work you have done. Hope the rain is mostly over for England. We've had a lot too.

Barbara,
the Garden looks great and I like that crafty thingy.
Maine broke records for rain in June. Now we have a heat wave.
Next week looks cooler and less humid.
Middle America is praying for rain, the crops are drying up, that means more $$$$ for Veggies.
yvonne

A natural swimming pool! How unique. I love what you're doing with your garden spot - and I think your quirky piece is fun!
~Adrienne~

I'd been hearing about the deluge that was supposed to be summer in your part of the world. Your roses are surely appreciating the sunshine! What is that glorious orange rose?

Lovely garden. We are in the hot, dry midwest. We've been praying for rain in the worst drought I've ever experienced in my 51 years. Finally the rains came. We got some more today, but our lawn is still mostly brown and many have lost bushes, etc. The farmers are hard hit and we have stocked up on basic foods in anticipation of higher prices. Wish we could have shared the rains you were getting! Beautiful orange roses!