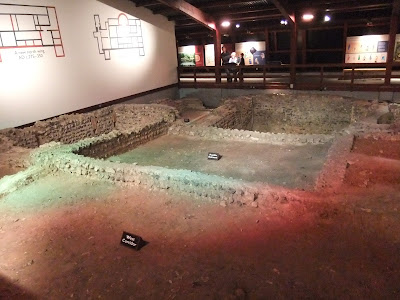 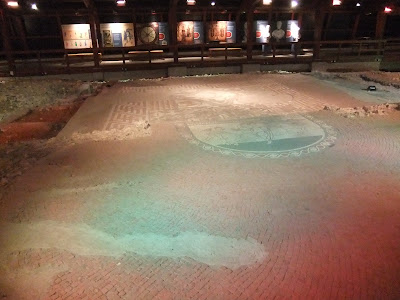 The following history written in smaller script was taken from the English Heritage website
Evidence of the villa is first recorded in about 1750, when the fence around Lullingstone deer park was being renewed, and holes for posts were dug through a previously unknown mosaic. (1) These events were reported by John Thorpe in 'Custumale Roffense', published in 1788, when Lullingstone Chapel was also illustrated having been drawn in 1769.

First, the central core of the house was radically altered when an apsidal dining room or 'triclinium' was built across the line of the western corridor, splitting it in two. This dining room, with its attached audience chamber, and the mosaics within the rooms, demonstrate the increasing prosperity of the villa.
Within the triclinium, which has been claimed as a 'caenaculum', where diners would have reclined on a single crescent-shaped couch, the mosaic tells the mythical story of the Rape of Europa, who was abducted by the god Jupiter disguised as a bull. One of the accompanying cupids attempts to intervene by holding on to the bull’s tail.
The main mosaic panel in the audience chamber tells the story of Bellerophon, Prince of Corinth, on the winged-horse Pegasus, killing the Chimæra, a fire-breathing she-monster. 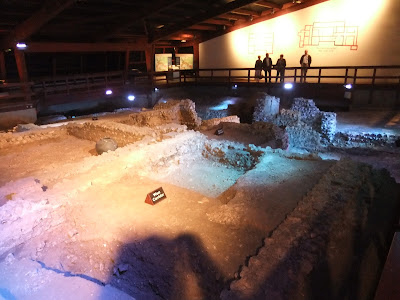 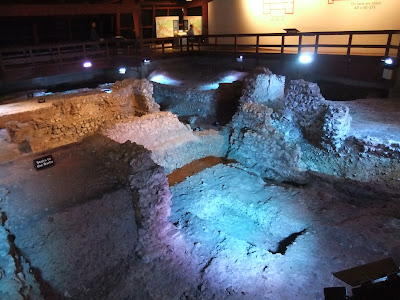 The first building for which we have evidence was certainly constructed by AD 100 and perhaps as early as AD 80–90. 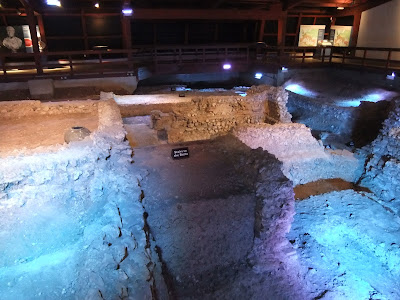 In the second half of the second century, possibly around AD 150, but perhaps as late as AD 180, the simple winged-corridor house was substantially enlarged. Such development normally suggests increasing prosperity on the part of the owners. 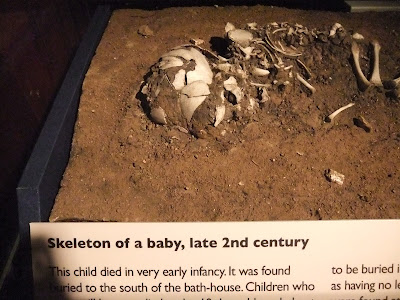 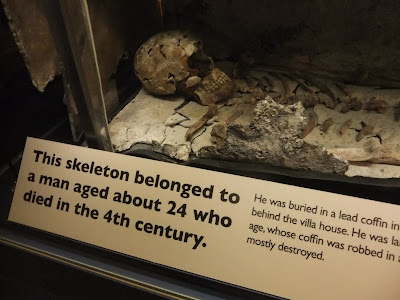 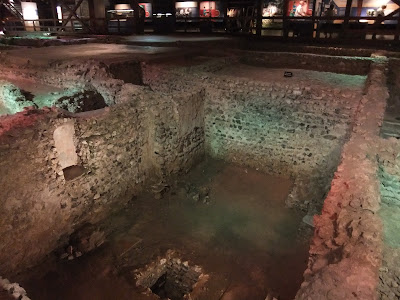 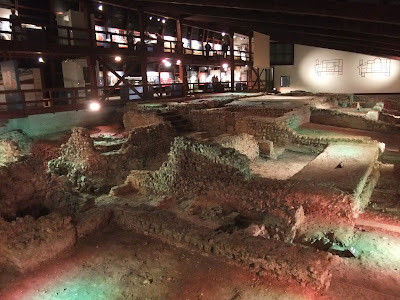 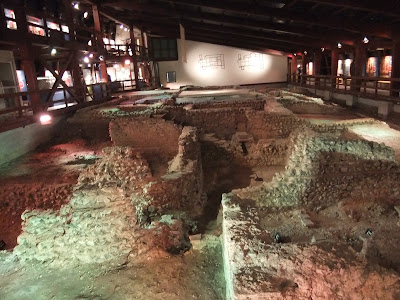 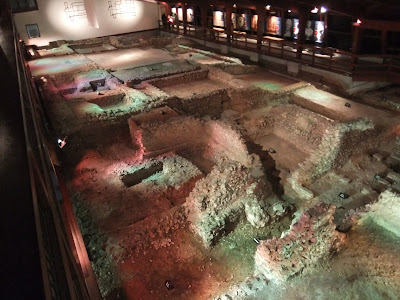 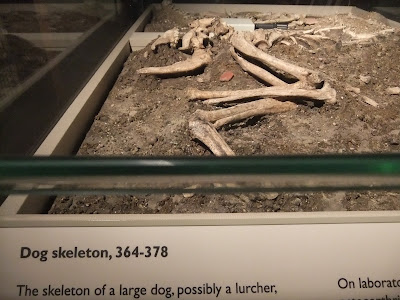 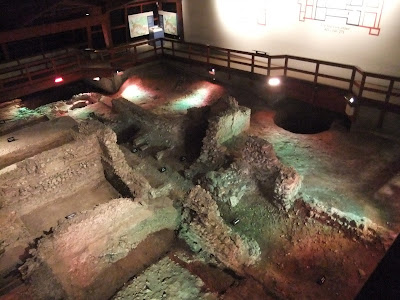 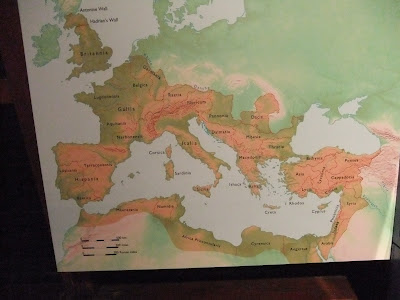 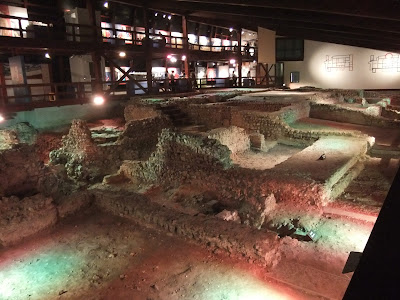 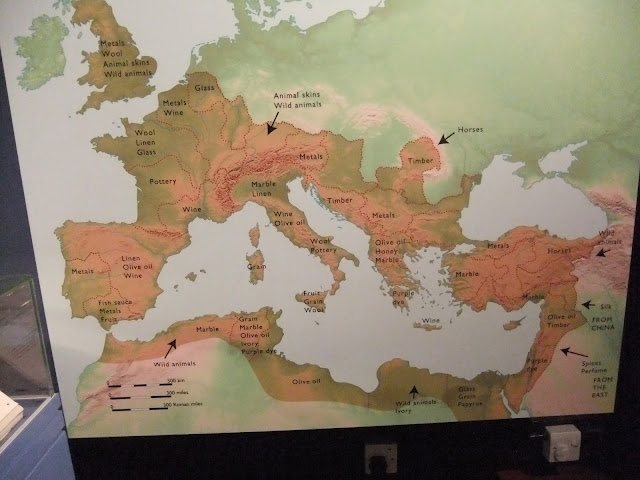 I have made this photo larger in the hope you can see the different commodities being produced around the empire at that time
England is metal, wool, animal skins and wild animals 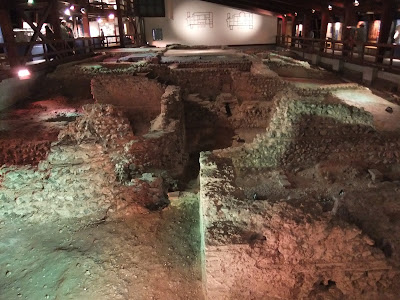 It's very interesting, Barbara. It's easy to forget sometimes that the Roman Empire extended into Britain.

I hope your Easter celebration is joyous!

I looked a long while at the map, and was a bit peaved that Rome should be taking so much away from other countries... then I realized they left some things behind, too. They left their skill at road building and architecture. In the long run, the subjugated may have gained more than they lost. Thanks for the tour. Reminds me of the "in situ" dig we visited in South Dakota... digging out wooly mammoths and a couple of saber toothed tigers that had fallen into a pit. There was a building above like the dig you show, with the colored lights, too.
Looking forward to the next post.
Hugs!

It looks amazing. I have never been, but now I will have to add it to my list of places I would like to see. My list keeps getting longer!
I hope you are having a very Happy Easter.

Very interesting post today. Going back in times like that would be a little eerie so I suppose that lighting is for effects more than anything. So much history in that space. Hard to imagine life in those times.

SO fascinating. We went to Bath, when we were in England. I was to enthralled that when we went to the British Museum later that week, I spent most of my time in the Roman-England section. Just fascinating to read about what English farmers found in their fields. And probably are still finding!

oh my...soo interesting..fascinating! my boys are history buffs and would just love to see this!! thanks for the great pictures and history lesson!

Very interesting. Britain's history is indeed an ancient one.

I am so bored here in Maine with this bad hip. As soon as I can I am going looking for adventure. I love your life, wish I had someone
like you two as friends here in Maine. I love the places you
explore. Awaiting the next episode. Yvonne

I am not sure I would like those coloured lights either.

Of course it was interesting - your posts always are, Barbara.

(Thanks for the idea about my profile - unfortunately my profile editor won't let me capitalise my main blog name. I wonder how other folk did it??)

Who's a clever girl! I've found how to capitalise my main blog title and it now stands out in my list of blogs. Thanks for your help, Barbara, much appreciated.

It is so good to have sites like this to learn more about the history. Hope you are having a good week.