London on a July Sunday Pt. 3


We are now walking towards the south side of St. Paul's cathedral 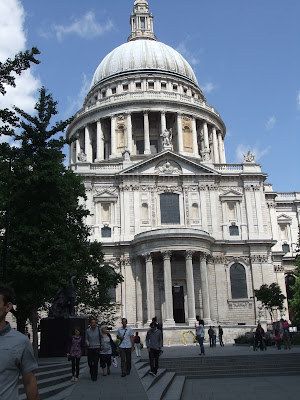 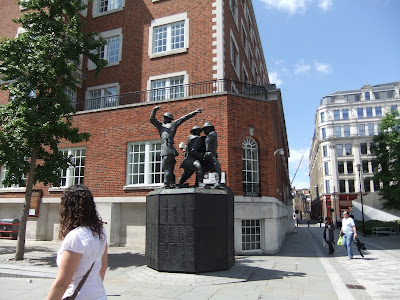 passing a war memorial on the left 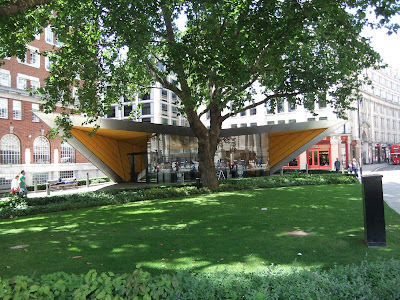 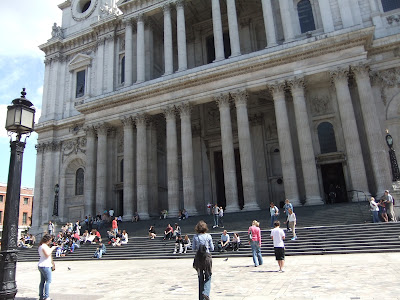 Looking towards the front entrance 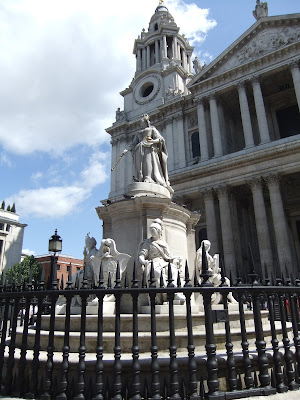 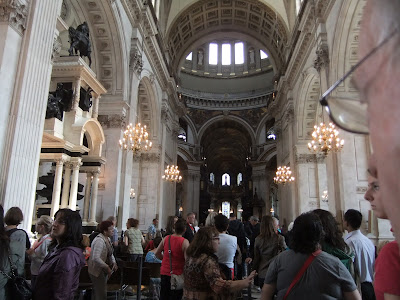 before going inside where one is not allowed to take photographs (naughty) The only way to see the cathedral these days is with a tour guide or if there is a service to attend which offers limited viewing. One was just finishing here. I remember the days of unlimited access and photography but that was before the days of mass tourism 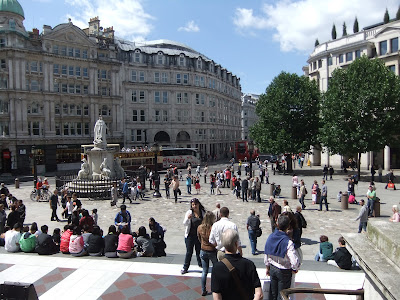 Looking down Ludgate Hill from the steps 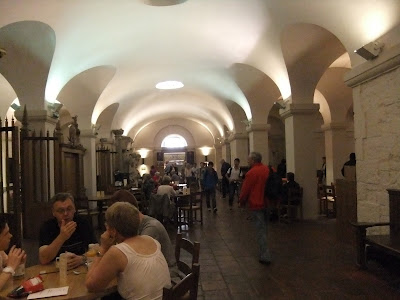 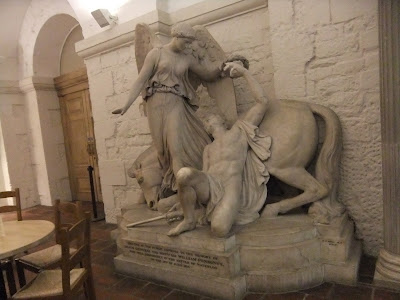 next to many interesting statutes 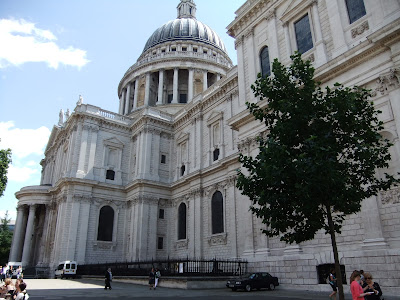 St. Paul's is the 5th cathedral to have stood on this site since 604 ad and was built between 1675 and 1710 after it's predecessor was destroyed in the great Fire of London. This was the first cathedral to be built after the English Reformation in the 16th century when
King Henry VIII removed the Church of England from the jurisdiction of the Pope and the Crown took control of the church's life.
For those who enjoy history the following is some extra information taken from St. Paul's website.

Throughout its history, St Paul's has been a place where the individual and the nation can express those feelings of joy, gratitude and sorrow that are so central to our lives.
Among the events marked at St Paul's are royal occasions. In 1897 Queen Victoria chose to commemorate her diamond jubilee here. More recently Queen Elizabeth II has celebrated her jubilees at St Paul's , and also her 80th birthday in 2006. Royal weddings have been held here as well: the marriage of Catherine of Aragon to Prince Arthur in 1501 and famously the wedding of HRH the Prince of Wales to Lady Diana Spencer in 1981.
As the nation's church, St Paul's has also been the site of state funerals of British military leaders, including Admiral Lord Nelson, the Duke of Wellington and of the wartime Prime Minister, Sir Winston Churchill. Services have also been held to mark the valuable contributions made by ordinary men and women involved in armed conflicts in the Falklands, the Gulf and Northern Ireland. A vast crowd also gathered at St Paul's following the terrorist attacks on New York on 11 September 2001, as London expressed its solidarity with the people of New York at a time of grief.
People of other faiths have a place in national services at St Paul's. In 2005, at the service of remembrance following the terrorist bombings in London in July of that year, young people representing different faith communities lit candles as a shared sign of hope during turbulent times.
In these symbolic ways London's cathedral seeks to be a house of prayer for people of all nations. It is a place for protest against injustice and for the public express of hope for a better society. Martin Luther King stopped at St Paul's en route to collect his Nobel Peace Prize in 1964. Involvement in the global community and social justice is as much a part of the working life of St Paul's as prayer and ceremony.

I remember the first time I went to St Paul's. My husband was in Windsor at a conference and I had 3 days all to my self in London. I went to St Paul's and just sat in a pew. It was so beautiful and peaceful. I then took myself off to St. Mary LeBow's. joined a group of women from Canada as the verger took us around on a little tour.
Lovely memories, thanks

This was lovely, thank you!
Did you happen to go out the side glass doors which are to the side of the large front wooden ones? They have words etched into the glass, perhaps they have been removed now? Would love to see if they still exist...

How did I miss part 2? It was a joy to travel with you again. When did they close St. Paul's to general visitors? It is such a beautiful place and it looks like a perfect day for a visit.

We couldn't take pictures in St.Paul's in 98 when we were there. It was momentous for me having read a book on the plague and how they used the church for a hospital and that it then burned down. Thanks for the pictures and history.
Hugs!

You're right about "mass tourism".
It's a beautiful cathedral, isn't it. It's amazing it can be kept up with so many people walking through.
Weekend blessings,
Anne♥

I enjoyed the beautiful cathedral photos. and all the walks....

I love the old cathedrals in Europe. Not much of that in the states. It seems to me it would be a good idea to visit London the following summer after the Olympic's when everything is spruced up but the crowds are gone. Thanks for sharing with us Barbara.

It is an amazing place. I remember the day the Musician and I visited it was practically empty, and we were able to climb up to the gallery above, and then all the way up to the rooftop...very steep climb! I tried to sneak a photo but got caught...we were able to take photos outside though, up on top. Quite a view of London from up there. It is a beautiful place inside; I wish we had been able to attend a service there. Perhaps one day...

Oh my, I had no idea it was so large nor that it had been rebuilt after the London fire either. I am enjoying your sights there. It is a shame that more pictures can't be taken on the inside.

Lovely pictures. Yes, sometimes so much tourism can be a bother.

What a wonderful tour, and one I'll probably never see in person.. I thank you so much.

nice post! thanks for sharing... God bless you... loves soraya

What a beautiful cathedral and the views from the top are well worth the climb.

I haven't been there since I was at school - and yes, it was free access then.

Fascinating. I really appreciate the views looking from the cathedral, and around the side, gives a more thorough feeling of what its like to be there.
xx
julie

Guess we're back to square one with being able to see an image larger. I so wanted to see the statue of Queen Victoria more closely.