Using the Railway Line & with History

Before leaving Somerset entirely behind let me share with you the current use of this disused railway station just a few hundred yards from where we were staying.
It's 8.30 in the evening and the light reflects that 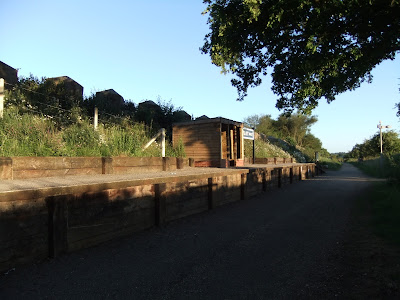 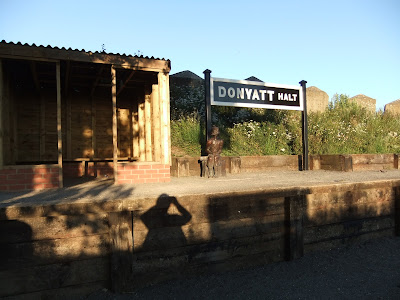 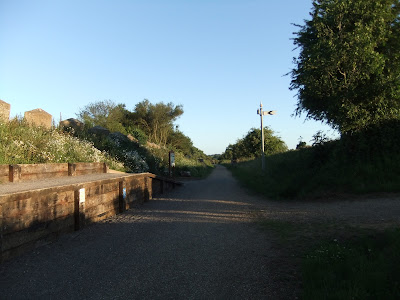 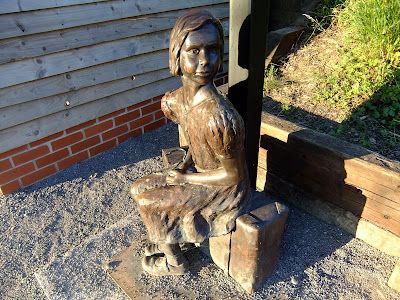 This statue is in memory of all the children that were evacuated to this area during the second world war
They would have arrived at this station carrying a small bag or suitcase not knowing when or if they would see their parents again
My husband was one of them at just 8 years old although living in the North he was evacuated to Yorkshire
For myself, I was just a baby so was evacuated to Wales along with my Mother and Grandmother 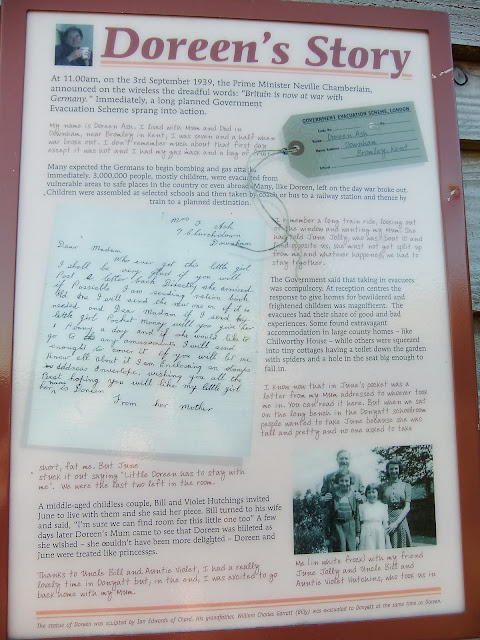 Here on the station we can read Doreen's story (one of the children who arrived here) by clicking until you have a full screen
The Mother's letter is heart breaking
It begins - At 11.0 am on 3rd September 1939 Prime Minister Neville Chamberlain announced  on the wireless the dreadful words, "Britain is now at war with Germany"
Immediately a long planned Government Evacuation Scheme sprung into action.
3,000,000 people, mostly children were evacuated.... 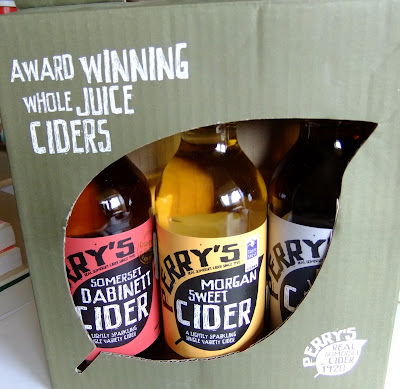 and finishing on a lighter note, Somerset being Cider country, this was a hospitality gift left for us at the cottage

becky up the hill said...

I so enjoyed this. I love English history and WW2 has been a special area of interest. The 'pill boxes' behind the station, I don't know what those are? Thanks for this wonderful blog. In Him, Becky

I enjoyed this post very much as I have recently been reading a lot about the wartime evacuees. Thank you for sharing. Doreen's story is very moving, and she was lucky to be placed with a good couple. Was your husband's experience as positive?

I can't imagine the anguish of mothers, fathers and children alike at having the fabric of their family torn in such a way. Heartbreaking.

Question: What are the pill boxes used for?

What a very touching letter from a mother. How good to know that the children were billetted with someone who was kind to them.

Fascinating reading on that plaque. I can't imagine having to leave my parents at a young age to go live with strangers, nor being the mother who wrote that letter...I'm glad that June Jolly stuck it out, and that everything turned out well for these girls. These days, I don't know how safe it would be to trust one's children to strangers across the country....

How was the cider?

Loved your blog and the stories you shared. Cheri

Regarding Pillboxes, they were built for defence against a possible German invasion. This site might be of interest www.pillboxesuk.co.uk

That story of Doreen and the lovely statue had me just engrossed! Thank you so much for sharing it.

Such a moving story. I can't imagine what it must have been like during that time.

The story of Doreen made me both happy and sad--happy for the generosity of so many people and so very sad for the bewildered and frightened children. What a desperate time it was.

Barbara, it is heartbreaking to hear from someone firsthand that has experienced war evacuations as you and your husband have. Seems that we live in our own little corner of the world and sometimes things that have happened in other countries seem surreal, until we hear it from someone who live through it. I look forward to the day when men will learn war no more. Blessings dear friend.

My husband and I love history, but this is sad history, indeed, when little children must be uprooted for their own safety, and placed in the kindness of strangers. It was good to read about Doreen, thank you.

Oh my...John and I are sitting here most touched by that mother's letter and the times that you and Alan experienced. I feel and fear that we are in similar times now.

I have always fancied staying in one of those old railway stations - I think there is a Landmark Trust one. And what a nice present to find in your holiday cottage!