A quick update for those enquiring
Our car has not been found and the courtesy car was only for 2 weeks. However we are very blessed to have a son who has lent us his car for the moment.
The stress of having our home broken into in the middle of the night while we were asleep and our car, that we had purchased only 3 months ago, stolen almost pales into insignificance when dealing with the insurance company.
They have offered £3,000 less than we paid for it and sent a cheque for £10 to cover personal possessions that were in the car which totalled £228. My mobile phone which was stolen from the house comes under a different insurance so no point claiming for this. Unfortunate that I lost my watch and a camera chip just afterwards too.

I wonder if the thieves have any idea of the affect they have on other people's lives. I can only continue to pray for them.
Thank you to everyone for their loving E-mails and comments. Much appreciated.

Now lets take a trip back to July and revisit an enjoyable walk around Sherborne which we did after our visit to the castle. 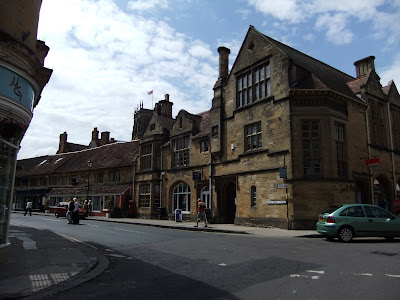 Sherborne has an abundance of medieval  buildings, a magnificent Abbey, world famous schools and two castles (last post).
It is a delightful shopping town and has become an important centre for art and antiques. There are also cafes, inns and tearooms aplenty. 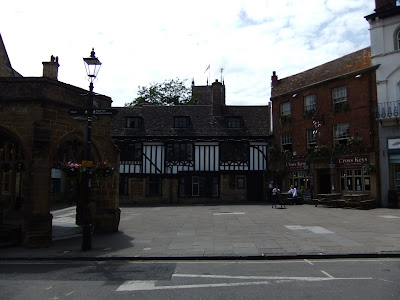 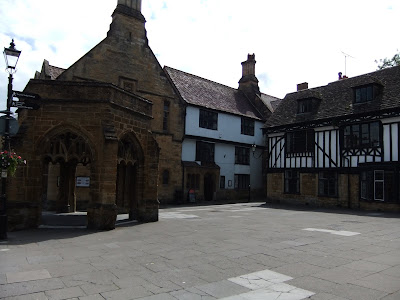 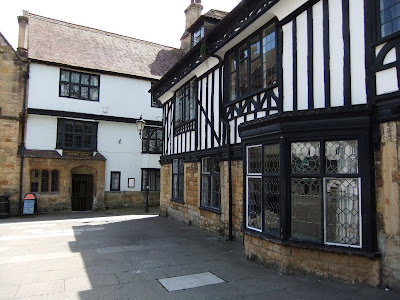 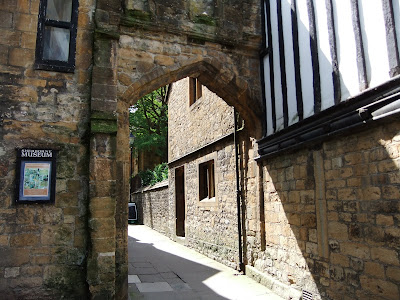 Walking through the archway to the Abbey 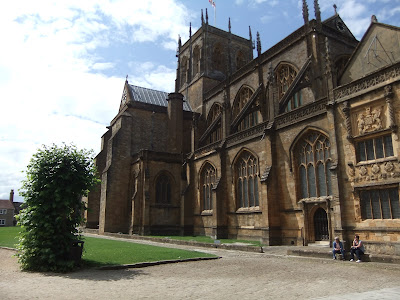 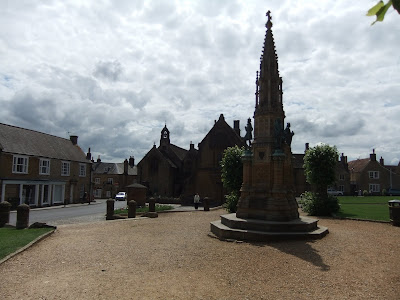 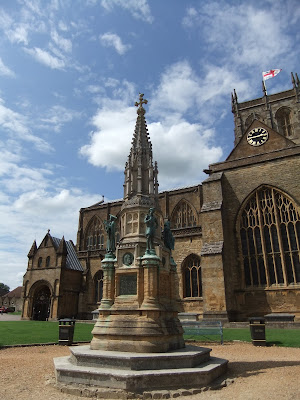 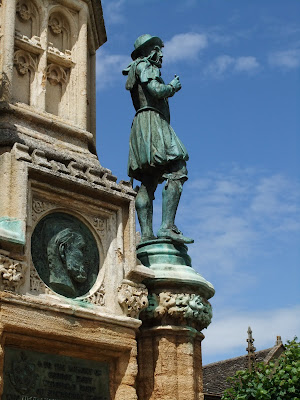 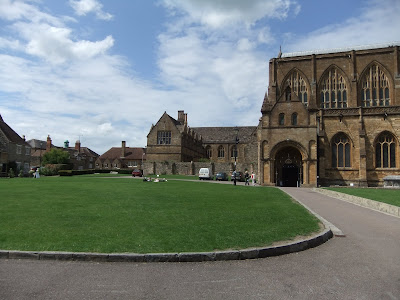 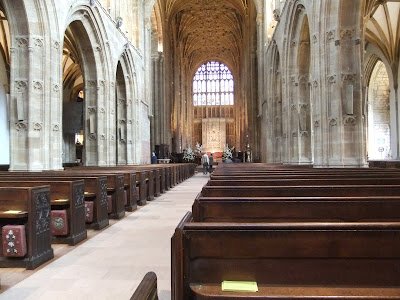 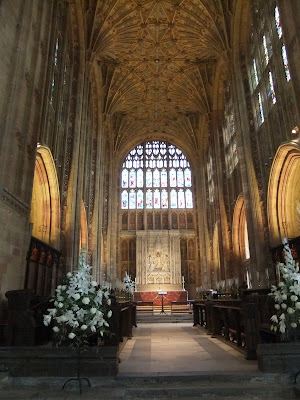 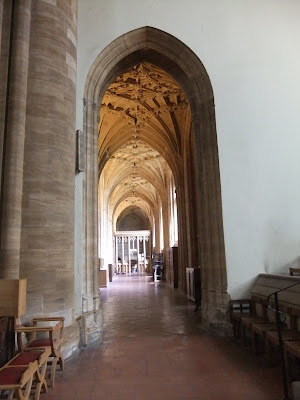 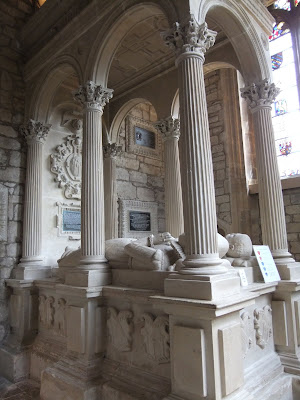 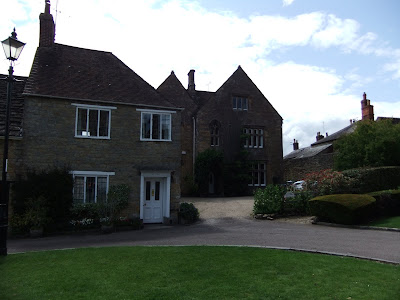 Views around the Abbey Close 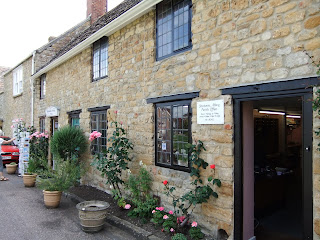 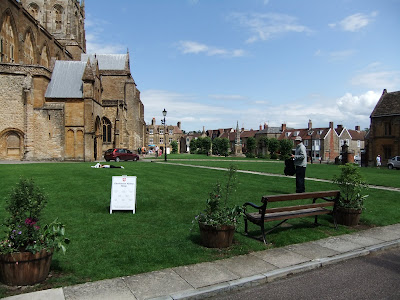 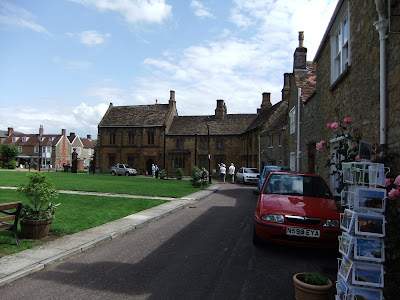 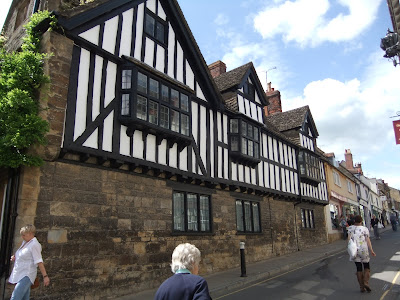 And back into the town 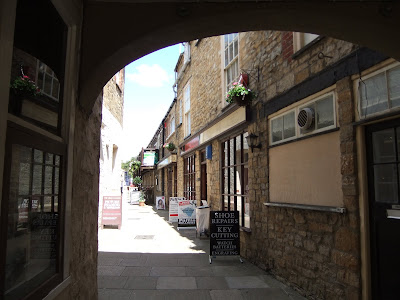 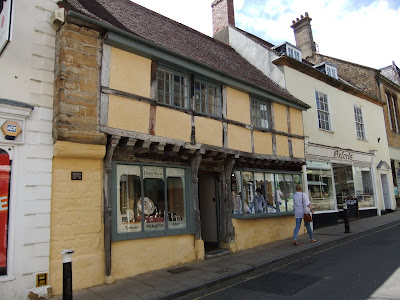 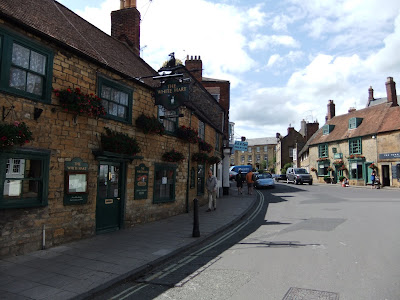 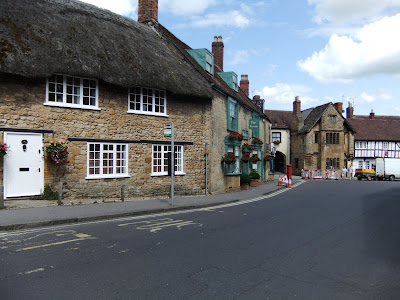 So sorry to hear the news of what is not being done as far as your insurance goes. That is a sad state to be sure. Being violated like that is something that would be so hard to deal with let alone not having the insurance follow through as they should. I did enjoy all the lovely pictures you had in your post. Lots of lovely memories there for you.
Take care!

Sherborne looks lovely,so well cared for and spotless.I love the timbered fronted shops and houses too.
Sorry to hear you suffered further losses after your car was stolen.Insurance companies can try our patience at the most vunerable times!It is a sentiment I have often heard and read about the distress caused to the victims of crime,as they wonder if the criminals realise the pain inflicted on those they steal from.
Hopefully ye will move on from this and be stronger in spirit!

Have been to Sherborne this morning for shopping including bread and vegetables in the market held in the square by the Conduit (photos 2,3 and 4)! Your photos of the Abbey take me back to when our school used to hold its carol services there. Did you see the bones of King Ethelred whilst you were there? The Peter O'Toole version of the film Goodbye Mr Chips was filmed in Sherborne too and the headmaster's house in the film was one of those you show - possibly the one which is now the Abbey shop. It is indeed a lovely town and it hasn't changed a great deal since I lived there back in the 50's and 60's.

So sorry to hear about your burglary.

Sherborne is a charming town. I, too, love looking through the arches. The Abbey is magnificent. It looks like it was a wonderful day to visit too.

What a shame the coverage is so poor in your losses. I really do not think that they ever consider the trauma and loss when they break in and steal.

Your photos are so beautiful and the town looks so quaint and lovely. I'm so sorry for all you lost we'll keep praying, Cheri

Sorry to hear that troubles of the break in continue. Faithfulness of your prayers is an encouragement to all who read this and a challenge live a life fully surrender to the Holy Spirit's leading.

Insurance companies do seem to thrive on peoples' misfortunes, I'm sorry your is so unhelpful.
We love Sherborne!

I admire your country so much in the way the architecture is treasured and protected. Really the town looks so pristine.
How good of your son to loan his car.
xx
julie

I'm sorry to hear of the ongoing troubles regarding the theft. I hope they are soon resolved.

I love thinking of all the people who have worshiped God in those places for so many years.

All these views are wonderful to look at with their very old architecture, the arches, thatched roofs, half-timbered facades, old glass...the list is endless. And I'm guessing some people may need to duck to enter a few of these ancient doorways too. And the most marvelous thing for me was to learn that the beautiful Abbey is the home of a vibrant Christian community all these centuries later.

Barbara, I do hope that yoy have recovered to some degree from your dreadful break in, I missed the original post as you had somehow slipped off my radar, I had put a post it note on the computer to get on to your site, but lost the address, but I found it and here I am, Loved the pictures of Sherborne, as I mentioned before, I'd been to several dog shows there, but never actually had the chance to visit the town, so thank you for showing me what I've missed.

Terrible about your break in.....the one thing that is the silver lining is that you and your husband are both safe and were protected. I do hate that it happened though.
It makes me angry that people think they have the right to rob and steal from good citizens.
Then just to have so much frustration with your insurance company adds to the situation..especially since they should be on your side!
10 pounds for possessions lost? That's absurd.
I could rant all day about this...but better now.
Hang in there..it will all work out in the end some how. I've seen it happen before.
I love this bit on Sherborne Castle...so historical.