Everything is not always Rosy in the Garden

Gardens never stay the same. Always evolving throughout the years
My neighbour on one side had a new fence erected
Certainly a good move as the previous construction was an eye sore
However as they are in their nineties it involved a lot of hard work for us as we endeavoured to dig out lots of stuff on their side for them in order for the men erecting the fence to be able to do their job
However it also meant I had to remove the shrubs I had growing up trellises next to their fence. This has left me with quite a bare area so not wanting to increase my workload I have planted 3 Eunonynous that will 'eventually' cover the area needing only miminal pruning 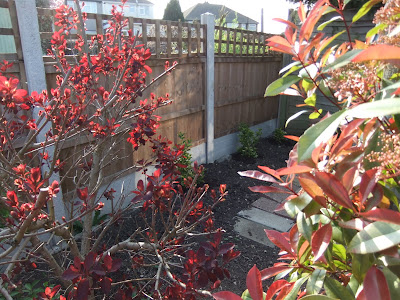 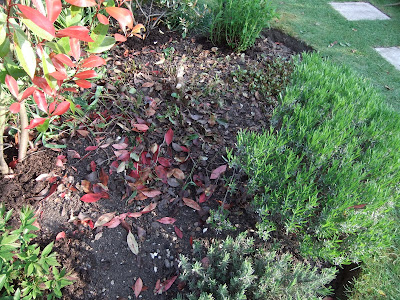 Here we see a large gap where I have removed a very diseased Variagated Virburnum. I have planted a Choisya in it's place which will take quite some time to fill the gap. 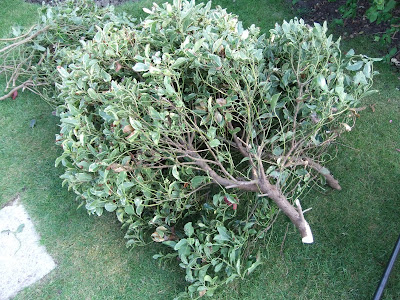 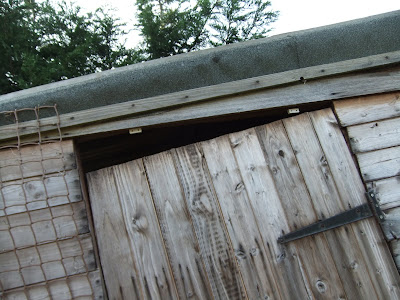 As we see here our bottom shed has decided enough is enough and is leaning at an angle. 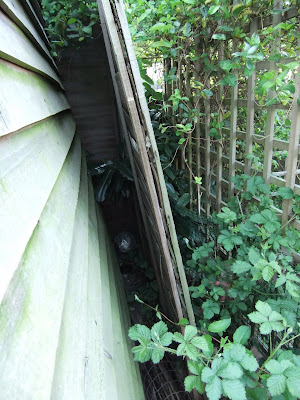 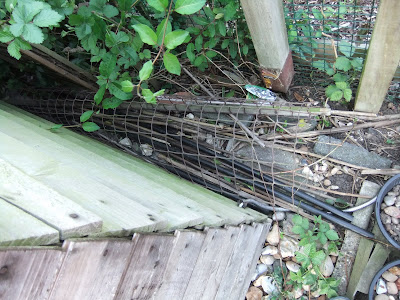 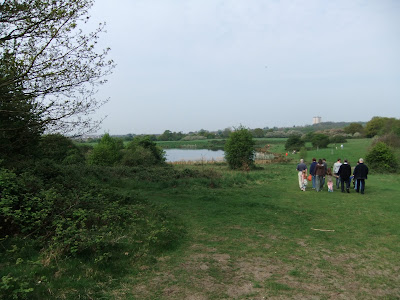 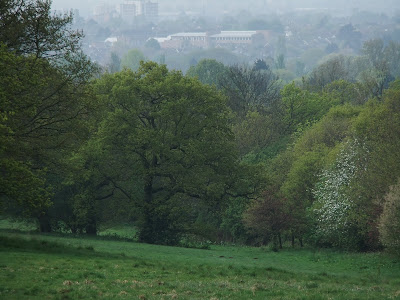 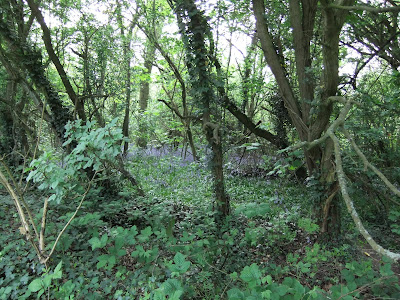 A hint of the beginning of Bluebells in the woods
Not normally flowering until mid-May
This week has seen a heatwave reaching into the low 80's here in the South East. Unheard of in April ever before.
As I type it is breaking a little with a thunder storm.
So what have I been doing in the heat?
Lots of gardening, pruning, cutting back, planting and weeding.
Have chosen a new car to replace our ancient one
and bought a top of the range laptop PC with a 23" monitor and wireless keyboard etc. for when I want to use it as a desktop. Also an all-in-one high tech photo printer
Quite a bit of my time is now well taken up with learning Windows 7 and all that is entailed transferring so much data not only to a new computer but to a new system. I will be running the two alongside each other for quite a while I think!
Obviously clearing out an old shed and setting up a new one will be a priority too. Life is never dull!
Lots more of London to come.
Easter Greetings to all.

Always something to make you work hard. Things will soon be lovely again in that spot.
We in the South USA are in full spring bloom.
Happy Easter to you!

What wonderful weather you are having. Here it is wet and chilly. The garden is slow this year. Hoping your new shrubs take hold and grow well.

Dear Barbara, wishing you and family a very Happy Easter. I know what you mean about neighbors and fences.It is a lot of work to put them in. Please get a photo of the bluebells I love them, and they are growing wild in the woods? How beautiful.

Oh boy! A lot of your work sounds like the back-breaking kind. The fence does look nice; too bad that it meant so many changes and all that tugging. Your garden always looks beautiful to me. (I no longer know all that is in my garden as I drew a map and no longer can find it. It's been interesting to see what's coming up.)

Enjoy that warm weather. We'd like to share in some of it, instead snow showers here all day. Nothing sticking, but still mighty chilly.

Blessings to you and your family this Easter.

Easter greetings to you as well, Barbara. It looks like you have had your hands full with gardening lately. How lovely it has been for you to have such unseasonably warm temperatures. I wonder if they are putting on a show for all the visitors to London for the wedding.

Everything is always changing! Hey, I lean like your shed does!

Happy Easter to you too Barbara! Great excitement with your new laptop and new car too to be getting to grips with.Having just completed a new fence too in our back garden the hard work is in removing the shrubs or hedge in our case to erect the fence.I love the way your neighbours choose an open topped fence style,ours is solid all the way,no conversational section to enable us to talk to our neighbours through it! From now on it will be voices not faces,I thought it odd that we wont be able to talk face to face again,there was always a gap in the hedge somewhere!Oh well we will have to converse out front I guess.

Gardens are a lot of work and nothing lasts for ever so it is a constant state of doing. That is a lot of work for you but to have it all is worthwhile. I hope your Easter is a wonderful one!

Happy Easter Greetings and blessings!
At last the day has dawned sunny. In contrast to you, we have had a vile, wet, cold spring. Raining all day yesterday.......
Blue bells already in England! Very weird weather.
Gosh, you have been hard at work in the garden, but obviously very much worth it.
All best wishes.

You have been real busy! No heat wave here--unseasonable cold! I think I have some work coming my way since we purchased more acreage. My husband is talking of taking the tractor over this week and making a path to our new pond. I long to take flowers over there so I don't miss transferring them when and if we build a house, but there's no good cultivated spot yet. Have a lovely holiday celebration!

Barbara, wishing you a happy Easter Monday at this rate. I'm sure your Easter Day was filled with lots of joy. :)

Happy Easter to you Barbara and I do hope you do find some time to rest!!! :))love, Judyx

Easter greetings to you, too - I have enjoyed catching up with you again.

Oh my gosh...and I have been whining about all the pool mess. We are still in the middle of getting it all put straight. A gate to be done and an arbor to be placed. I have been very busy with all that too. The fence looks great. I must say as I am replanting my garden I am hearing your comments about less upkeep with the shrubs and I have been putting in a few shrubs here and a few there thinking more of that to come down the road =]

A new car and a new computer...lots of fun. Just be glad you are only switching to Windows 7 instead of a Mac...I am still lost on this thing. You will get the hang of windows 7 very easily.

I hope you will keep us abreast of all the Royal Wedding hoopla. So very fascinating!

Oh, I do like that handsome fencing. With the help of our neighbor's dogs, our fence is quickly crumbling. And congrats on your new computer. I know the learning curve can be quite steep at first, but hope you will enjoy all its benefits.

Good choices for the new bare areas. I always vote for low maintenance.

A new computer. I'm in heaven. I really need to get a laptop this year. Once you get used to Windows 7, you'll be on easy street. Very good to use.