The Silversmith and some Colchester

I came across this recently and liked it

There was a group of women in a Bible study on the Book of Malachi. In Chapter 3 verse 3 it says: ‘He will sit as a refiner and purifier of silver’. This puzzled the women and one of them offered to find out all about the process of refining silver and report back to the group next time. She tracked down a silversmith and made an appointment to visit his workshop to watch him at his craft. She didn’t mention the reason for her interest.


She watched as the silversmith held a piece of silver in a flame and let it heat up. He explained that to refine silver one needed to hold the metal right in the centre of the fire where it was hottest so as to burn away all impurities. The woman thought of God holding us in such a hotspot from time to time but wondered again at the words of the verse ‘He will sit as a refiner and purifier of silver’. When she asked the silversmith if he really had to stay sitting there in front of the fire the whole time the silver was being refined, he answered that yes, he not only must sit there holding the silver steady but he needed to keep his eyes on it every second it was in there. For if the silver was left a moment too long in the heat it would be destroyed.


The woman asked one final question. ‘How do you know when the silver is fully pure?’ He smiled at her. ‘That’s easy! It’s refined when I can see my reflection in it like a mirror.’ 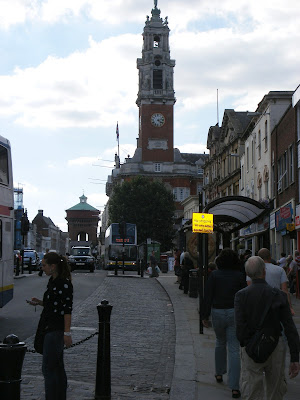 Thought I would post these last few photos of Colchester. You may remember my post on Colchester Castle and it's history.
Colchester is Britain's oldest recorded town.
The Emperor Claudius spent just sixteen days in Britain, long enough to lead his troops into Camulodunum and receive the submission of several British kings. The Roman army then built a legionary fortress on the highest ground inside Camulodunum, the site of the present town centre.

By AD49 the fortress at Camulodunum had been turned into a civilian settlement named Colonia Claudia after the Emperor, and this became the first capital of the new Roman province of Britainnia


Here we have just left the castle and are walking up the high street. 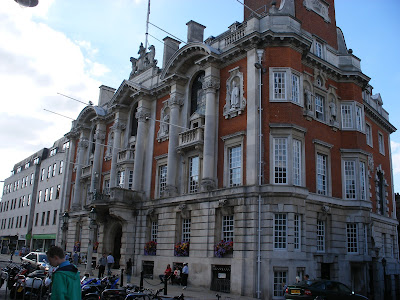 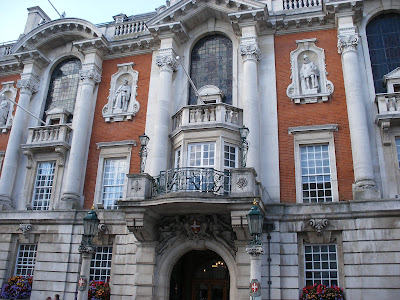 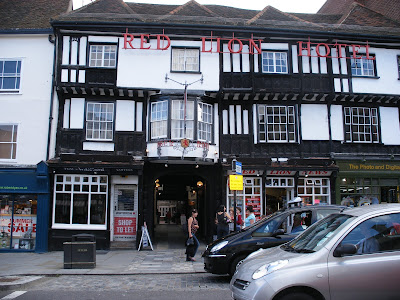 An old coaching in from the front 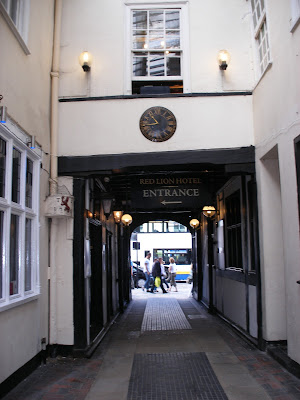 and from the back 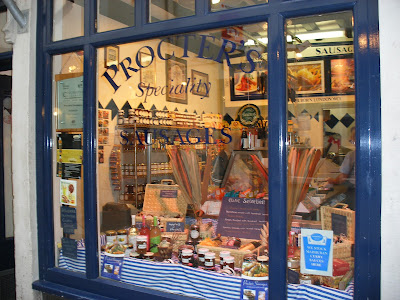 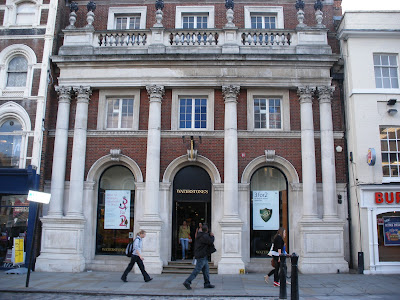 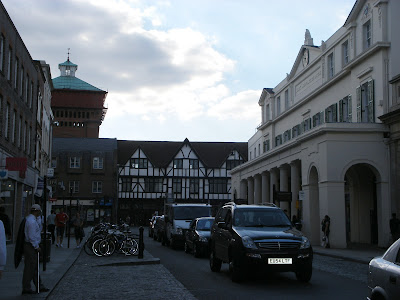 and a selection of other shops and such a mixture of the old and new
Posted by Barbara at 16:14

I needed a little trip out like that today. It's wonderful to go sight seeing through another's eyes. Here the snow is mostly keeping us all in where it is warm. Thank you!

I have heard that story before and I liked it just as much this time as the first. It's a good one to remember especially when it is getting so hot.

There's a famous Red Lion Inn in Massachusetts. I'm just now putting two and two together and deciding that it's a copy of the one you show. Possibly anyway.

Too bad that you couldn't buy some sausages...don't forget that cooler next time!

Gosh, I have not been t Colchester since the 1960's and did not recognize it at all, so fascinated to see it again.
Greetings from the land of snow.....today with rain on top of it!

I love the story of the silversmith's definition. I've heard it before and have used it in my chaplain ministry. I want Him to see His reflection in me!
~Adrienne~

Yes, I love the story. He stays with us, with His eye on us, through it all.
Photos are beautiful.
Thanks for sharing. :-)

A marvelous story about refining silver...I had not heard that one before.

I see Alan ambling along on High Street. The architecture and especially City Hall with the statues is remarkable. I like the one gentleman ensconced in his niche to the right, with the ruff and what I guess are just-above-the-knee pantaloons, cape and high hat. Elizabethan, perhaps?

I guess God does watch us closly. I enjoyed the silversmith story. These towns are so unique, Bet that Red lion inn is nice, That was the restaurant's name on my first date with my Husband. The Red Lyon. Ahh!! memories.
Prime rib and Yorkshire pudding, yes in Houston, Texas.
yvonne

I guess God does watch us closly. I enjoyed the silversmith story. These towns are so unique, Bet that Red lion inn is nice, That was the restaurant's name on my first date with my Husband. The Red Lyon. Ahh!! memories.
Prime rib and Yorkshire pudding, yes in Houston, Texas.
yvonne

Beautiful! You are making me miss England!

Dear Barbara, It is now several years ago that I last went to Colchester....and then only as an aside as the real purpose of my adventure in Essex was to visit Beth Chatto's garden which is close by. The Town Centre looks quite different from how I remember it then, so it must be time for a revisit.

The story of the silversmith was well told. What a balancing act it is to be in the heat of the flame but not be destroyed....

i enjoyed the story..I enjoyed the walk through Colchester..I'll bet there were tasty things in the sausage shop. Balisha

Wow Sweetie,, thanks for sharing the awesome photos of your beautiful country with us.. I sooo love England ,,and all that you've shown... Maybe one day my Super~Hubb's and I will visit and perhaps trace my roots.. How wonderful that would be!!!!
And an even BIGGER thank you for sharing about our AWESOME Lord and Saviour on your blog...
May you know His Presence and His many blessings and be filled with the Holy Spirit of Christ today and always...
Blessings and Love from our Precious LORD above~~~Hugs Dena

Always love your tours,
and I've never had sausage as good as in Enland. Lake District, they called it Cumberland
j

Ha! I just came over from Vee's site and posted a comment on your March 2010 blog...hoping you are feeling well...and that I do, even today! But here I am, catching up on you and your lovely history notes! Thanks Barbara and have a blessed day!

Fantastic photos! Especially the specialty sausage shop. I must be hungry? :-)

Barbara, I found your blog through Elizabeth's NY blog or her World Examining Works blog. I am planning a trip to London in June, and I love seeing your photos and reading a bit of history. Lovely!

AMAZING facts! Thank you for educating me. What an awesome thing to think about - the silver refiner. Thank you!!

Barbara,
Needed that story about the Silversmith. Sometimes, it feels like life is so hard and empty. Knowing that God is right there all the time gives me some peace. Your pics are so beautiful. Hope to go to England someday. Just started watching the series, Rosemary and Thyme, a British series with Murder and Garden Themes. The gardens shown are more than EXQUISITE and my dream is to see them someday. Have you ever seen that series? I get them from our local library on DVD. I saw someone in church last week who looked JUST like you but you don't mention being in The Pacific Northwest anytime recently - so I guess that is impossible! Ha, Ha! Bye for Now, Melanie from http://www.countrycottageliving.com

A feeling of warmth came over me as I read your silversmith reference to the bible passage. I have heard that taught throughout my life and hearing it again is good. My purpose in life is that the Lord sees himself in me. Gerry