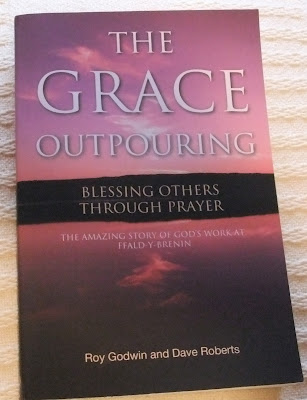 The write-up on the back cover of this book says it all.
Imagine a House of Prayer in every town.
Imagine churches filled with Christians who want to bless others; who want to pray and then stand back and watch God at work, changing lives before their very eyes.
Since his arrival at the Ffald-Y-Brenin centre in rural Wales, Roy Godwin has been able to imagine all this - because he has seen the amazing effects of God working in sovereign power on people who weren't even sure He existed! Roy has witnessed the outbreak of God's bounty and blessing in the retreat centre, in the grounds, in the fields and out in the community. His story will be an inspiration to all those who are looking for a new trust in God's willingness to bless the needy with repentance and the Holy Spirit.
These photographs were taken by a friend who visited last yesr 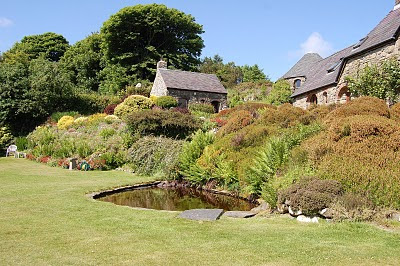 I read this book for the first time last year, though I have known about it for quite some time, as I know many people and have many friends who have visited and/or stayed there. As far as my reading the book is concerned, it impacted me with a renewed sense of Grace. For the people I know it seems people come away having had very different experiences but all speak of the sense of peace and the presence of God. 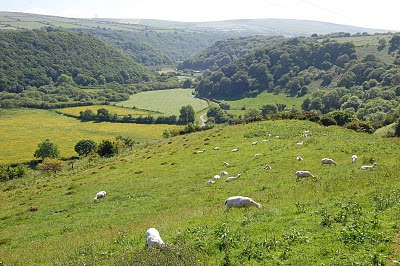 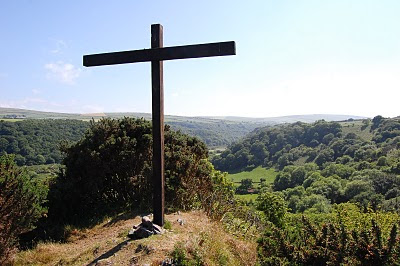 The chapel is built into the mountain
When Roy and his wife Daphne first took on the centre they did not understand why God had called them there as their ministry had been very much in evangelism. However very quickly God began to show them. People would drive past and feel compelled to drive up the hill and find out what it was all about.

Roy felt that what he was to do was offer hospitality, bless people and pray for them and leave the rest to God. Confirmation came when a couple felt compelled to drive up to the house and when offered tea the man began to talk about po*rn*ography and continued to utter foul language during a tour of the grounds. At the end Roy ushered him into the chapel and as he stepped over the threshold he fell to the ground and weeping called on God to forgive him asking God to clean him up and sort out his life.

The following link gives much more information if you are interested by clicking on the various subject tabs.

This is one that I had not heard of. I'm going to have a look at the website, it sounds a wonderful place to know more of.

Thank you for telling about this book, I will look for it.
I am so thankful for the grace of God in my life. His Word keeps out the adversity of the world from being stress in my soul.

This seems like my kind of book and my kind of place...the retreat center is beautiful to look at and obviously beautifully blessed with God's presence and the working of the Holy Spirit in answer to prayer.

It sounds like an interesting book. I will have to look into it. Thanks for the information.

What an awesome ministry to have. Another book to add to my ever growing book list!! love the photos.

It takes a lot of grace to cope with such a person as you last described. Isn't God good? Is He Not Good... Another book to put on my wish list. What beautiful photographs of this special place.

Think of you every day...all is well?

I've not heard of this book, but I plan to look into it. God's work is done in marvelous and mysterious ways.

Thank you for sharing this book. I'd love to read it. Oh, to see this happen in our cities and towns and watch God work in new ways in the hearts of people all around.
~Adriene~

Thank you for sharing about this book. It's going on my summer reading list.

Thanks for highlighting this book. I think I will look into it. Thanks!

I love this story, I also love your blog and look forward to reading more of your posts. Though we live in stark contrast in our way of life, we share common values and the same Lord God.
Blessings from a Kentucky country girl.

Sounds like a wonderful book! The photos were so very nice!

Hmmm this is catching my attention...I will check the link out Barbara, thanks so much!

I've read this book and also the little booklet that was written right at the beginning. I've always wanted to go. Some day...

Fabulous testimony! I have never heard of this book. I think I'm going to try to find it over here...maybe on Amazon?
Prayer/Intercession works amazing wonders that is a fact.

Never heard of this pace before but being in rural Wales would make it that much more magical I think. I'd definitely go if there. In fact I'd so love to go to the event they are having in London in july. Looks quite compelling. Thy for bringing to our attention.

I must look out for this book. I had not heard of Ffald-y-Brenin Centre either. Good of you to feature it.
Marion

Hello Barbara...I have just ordered this book and am looking forward to receiving it soon. Thank you for posting about it; otherwise I'd never have learned of it.