2000 years of History in Colchester

A visit to Colchester Castle Museum takes one through 2000 years of some of the most important events in British history.
Once capital of Roman Britain, Colchester has experienced devestation by Boudica, invasion by the Normans and siege during the English Civil War.
I am certainly not attemping to go through that history here but offer some photos and snippets of information from our recent visit  not having been there since we took our children when they were young even  though it is only 45 minutes drive away 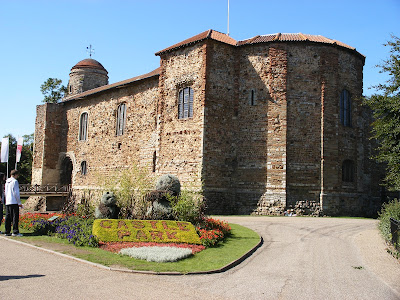 1066 was the defeat of the English by the invading army of Duke William of Normandy. After his victory at the Battle of Hastings, William strengthened his hold on the defeated English by ordering castles to be built throughout the country.
Colchester was chosen for its port and its important military position controlling the southern access to East Anglia. In 1070 work began on Colchester Castle, the first royal stone castle to be built by William in England.

The castle was  built around the ruins of of the colossal Temple of Claudius using the Roman temple vaults as its base, parts of which can still be seen today. 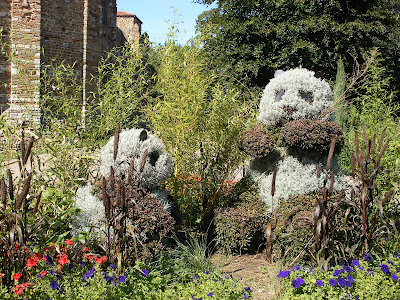 Some clever and fun topiary in the garden outside﻿ 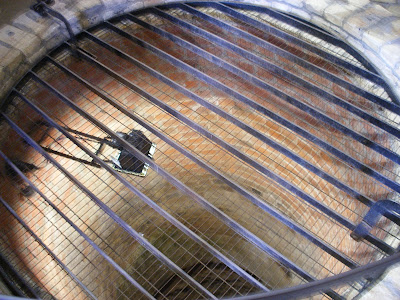 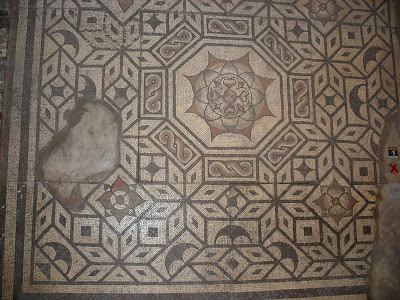 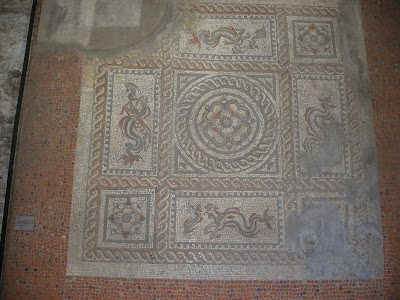 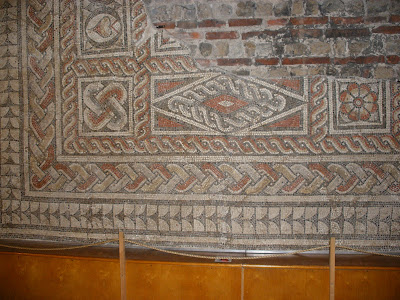 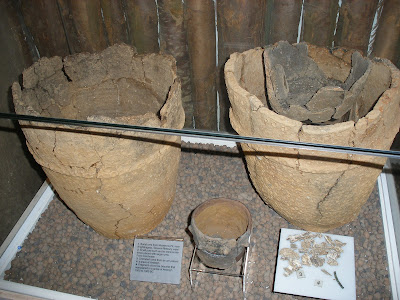 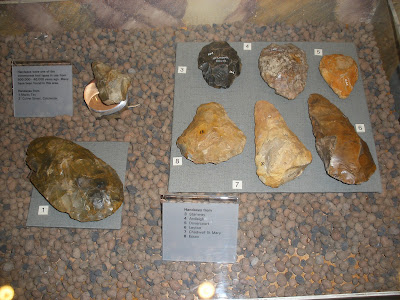 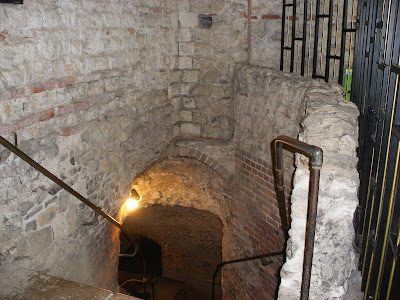 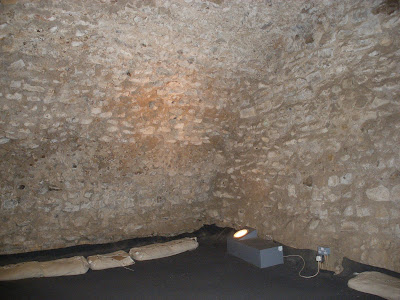 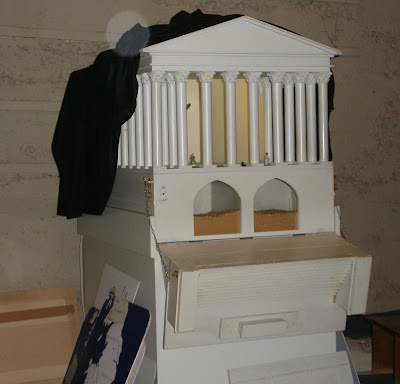 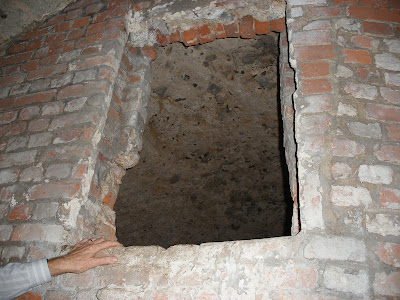 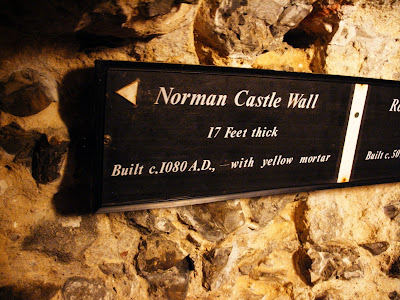 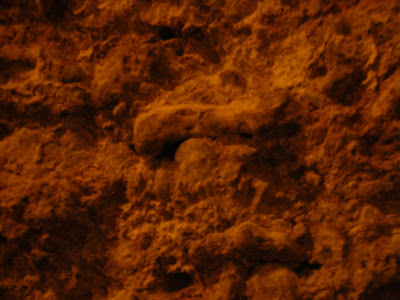 Seen here a bone cemented into the wall, probably an animal bone 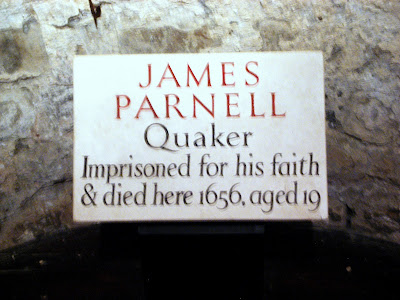 The prisoners were not all bad! 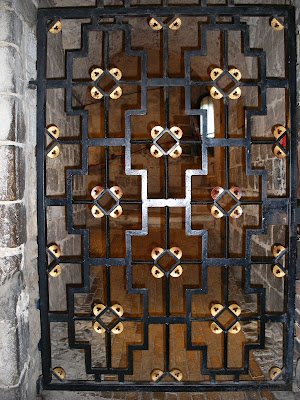 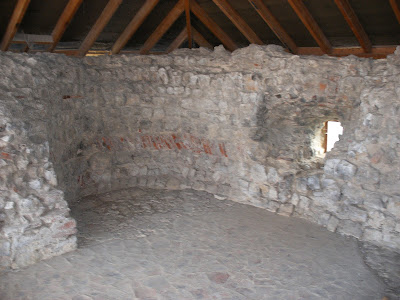 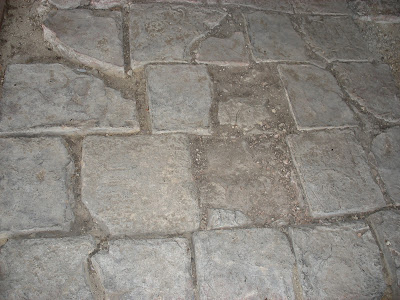 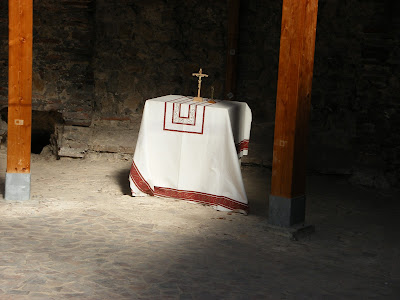 Roof was used as a chapel 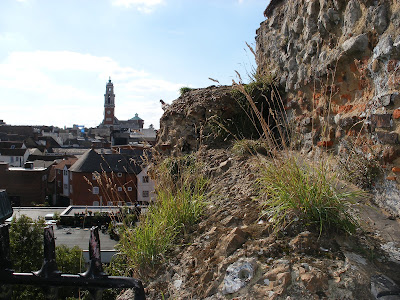 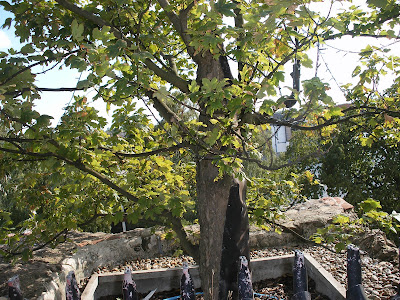 A tree growing out of the roof
Well that's the tour for today - I will leave you with a few interesting snippets
Used as a prison for 800 years
We had no written language until the Romans arrived
Britain was full of tribal Kingdoms
There were only local warriors to fight the Roman soldiers, fishermen and potters etc.
Thomas A Becket, King John, and William. 1st and 2nd came here
Posted by Barbara at 16:00

I found this quite interesting, and my favorite view is the one of the town from the castle. They certainly amassed a huge amount of stones to build a 17-foot-thick wall!

You are blessed to have to much interesting history close by and near you. Thanks for your prayers for our Suzette. We are standing strong in our Faith and this time of testing. She will be HEALED in Jesus name!!!!!!

I think the British Tourism Office should hire you, Barbara. Every one of your posts has me saying, "I want to visit there!" Someday, I will! Lord willing.

Dear Barbara, What a really splendid tour of somewhere which I have yet to visit and which, before now, I knew very little about. Such a varied and remarkable history all gathered together in one place. Your photographs and commentary have certainly tempted me. If you are not at present running the local Tourist Information Centre, then you certainly should be!!

We had lots of visits to Colchester and the castle when we lived in England. Market day was always a good day to visit, you could shop the market and enjoy the history as well. Those were the days before digital cameras, but I'm sure we have photos and leaflets about the castle. It is always enjoyalbe to visit your blog and have my memory awakened by your posts.

I haven't been to Colchester since 1965 (what an admission!) but the history of Essex fascinates me and I always enjoy your tours and information.
However, you did not mention lunch or TEA!
Hope they pop up in the next post.
I have a red book called Arthur Mee's Essex circa 1937.
Very useful for looking things up.
Cheers.

So much wonderful history surrounding Colchester. I am amazed at how well preserved so many of the items still are.

Thanks for the wonderful journey.

Awesome to be walking on a floor that old. I get goosebumps. Thanks for this wonderful education..

Thank you for sharing, Barbara.
This is all so interesting. I love history, especially English history - my great grandmother came from England as a young lady, met a gentleman on the ship she was traveling on, married him, and they settled in the US. I can still remember her; she passed away when I was quite young.
The mosaics are beautiful. I love wandering around castle ruins and such. It's just amazing to me how some of these castles and homes are still standing.
You are so blessed to be able to do this and have so much living history right around you.
Enjoy your weekend,
Blessings,
Anne

Very wonderful tour! Thank you for sharing your photos and a bit of the history behind them. It made me think back to history class - good for my brain to recall things learned long ago!
~Adrienne~

I love your history tours Barbara! Colchester Castle is an amazing place with so much history.

I had a peek at your post from last Sunday. Thinking it's still June, your garden is in full bloom! Wow!

Wow, very interesting. Thanks for sharing.

Great post again! I enjoyed the photos of your Anniversary on FB Barbara. Congratulations. My parents also celebrated their 50th a few weeks ago.

enjoyed the tour! we have traveled a number of times to England and you bring us some more wonderful glimpses of England with my laptop on my lap, my husband and kitty next to me! like they say...it is almost like being there! thank you!

Lovely photos and history,though I will always associate Colchester with a touring caravan my parents had years ago and later passed to me and my husband!The name Colchester was printed on the top front so I guess it had some connection with the place!

Your country has such a rich, varied, and vibrant history. Even though you provide snippets, it's enough to get curiosity roused and there's always Google. As always, beautiful photos.

mum and dad live in Colchester and the musuem is their favourite place to take my youngest two nieces (their grandchildren)especially in the summer holidays as they hold brilliant days for kids. take care, Judith

Thanks for the tour Barbara- what gorgeous mosaics. I've never been to Colchester so it was a pleasure to accompany you.