Hope everyone had a good Christmas. Ours was good but not quite as planned. Our son was over both Christmas Day and Boxing Day when he and I managed to fit in our traditional game of Scrabble - he won on both days! Janie and family were set to come over for Boxing Day but Oliver and his Dad were sick so Janie drove over with Rebekah for lunch but did not stay the day, wanting to get back to the family. It was unavoidable but such a disappointment not to see Oliver over Christmas, especially as Janie is back to work on the 4th, her maternity leave having ended, which obviously means there is not the opportunity to see the Grandchildren so much.


So what does one do between Christmas and New Year? My intention, yet again, was to do lots of 'house keeping' on both my computer and blog. Have I begun yet - no! Have I had the long walk planned for every day - no! We began on the two days immediately after Boxing Day with two really good walks but the weather deteriorated into constant torrential rain which has cramped our style somewhat as rain and COLD together is not conducive to walking. What I have managed to do apart from getting up late is make some greetings cards. 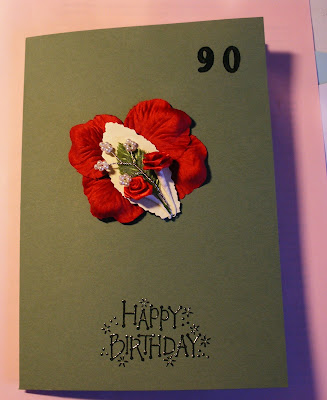 This one I made for my 90 year old neighbour. I think she must have been celebrating too much as later in the day she was screaming down the phone and laughing and giggling that it was the best card she had ever seen! 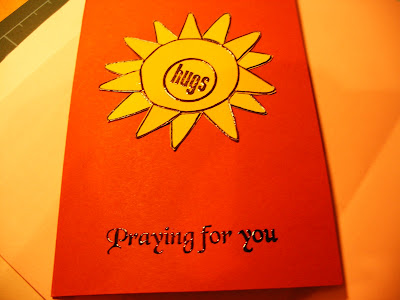 This one for a friend who has undergone extremely invasive back surgery over the Christmas period and is at present in constant excruciating pain. 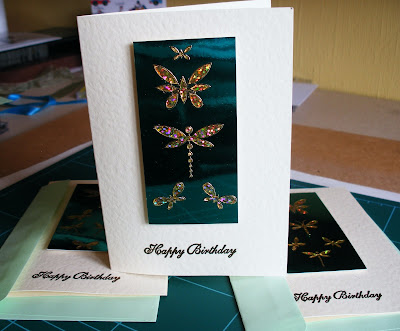 The rest for birthday or anniversary celebrations 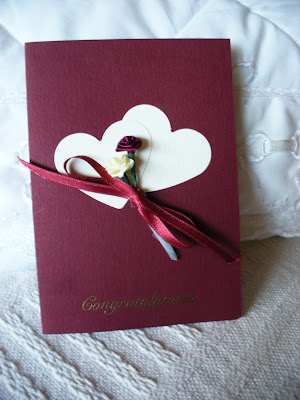 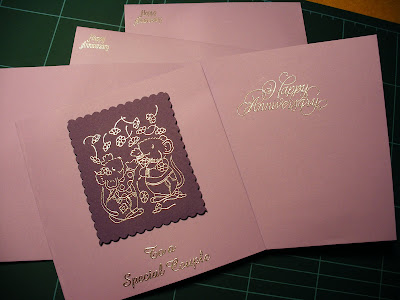 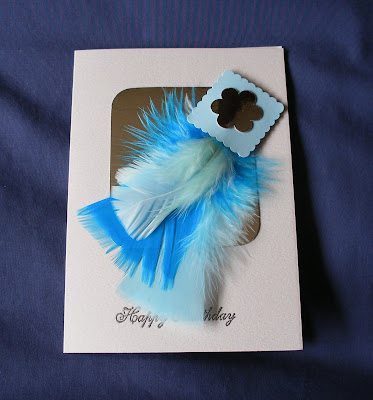 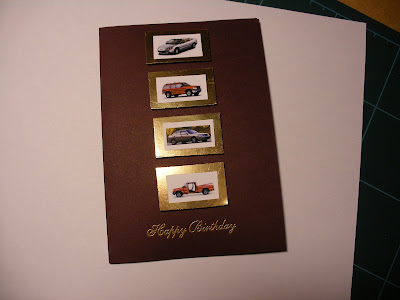 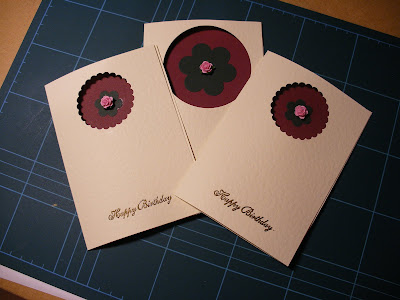 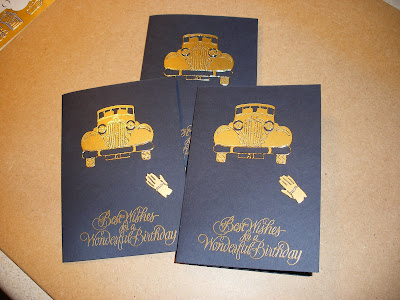 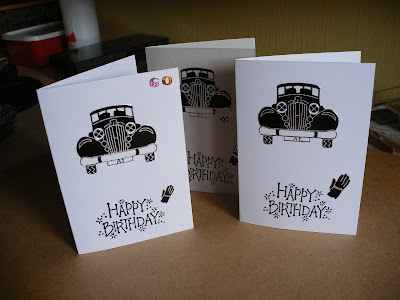 Instead of getting distracted with numerous other things I now plan to at least do some housekeeping on my blog - a new blog roll for a start and then maybe get to begin with the sorting and filing of masses of files and photos. I wonder if anyone remembers that this was a task I set myself last January - I am trying to forget that!

What wonderful cards and how clever to make them!

Beautiful cards Barbara and what a wonderful celebration your Golden Anniversary was! Loved hearing what Oliver had to say about it all. Do hope he is well again soon and no-one else succumbs, especially Janie. Will be in my prayers.

What a wonderful way to pass the time. I think the cards are beautiful. It means more when someone takes the time to personalize things like that. It's far too cold to be out here...I quickly go from the house to the car and into work each day and am thankful for good warm clothing. I'll be looking forward to seeing more pictures. Happy New Year !

I think we all feel the need to rest after a holiday, but I can't be unproductive for long. I need to send some thank you cards, so thanks to your post, that is what I will do today. Make cards and send them out.
You are such a wonderful inspiration to me and I am so glad you are my blogger friend. Happy New Year.
QMM

The cards are beautiful!!
Susan

Your cards are lovely!
I prefer getting and giving homemade treasures... wildflowers and flora as well, to the store bought ones...it meant someone had to put thought and time into it and it makes me (or I hope, the recipient) feel special :)

your cards are lovely... my daughter likes to make special cards too!

Housekeeping a blog? I don't think I know how to do that!!!

Hope your grandson has recovered.... don't worry Barbara - the better days and lighter nights are on there way!!!

Oh, Barbara, your cards are just gorgeous! It would be a real thrill to receive a card like that when you are feeling down (as your friend who had the back surgery).

Good luck with all the housecleaning!

The cards are just beautiful. I love getting home made things and now it is great seeing more people making cards to send to others.

I'm grinning with this post...ah, the best laid plans, eh?

Janie is back to work? Oh boy. That's going to be a change for you all and a matter for prayer as adjustments are made all around.

Your cards are lovely and no wonder that people are pleased to have such thoughtful remebrances of their special days and times.

Have said a prayer for your friend. The Lord knows us all and He won't mind that I don't know the particulars. He does.

Hello! Fun to see your smiling face on my followers widget today! Lovely cards. Hope you and yours are enjoying the holidays.

What a wonderful way to spend some time at home. Your cards are beautifully made and will be greatly appreciated.

May the New Year bring you much joy!

Hi Barbara! Wow! Your greeting cards are thoughtful and GORGEOUS works of art! I love them!
Isn't it funny how we make plans and then they become such a burden? I don't think I'll ever change. It made me feel better to read of your walking plans that didn't pan out due to weather. It is so icy here in Colorado right now - it doesn't even sound fun!

Schnitzel and the Trout said...

Beautiful cards. Anyone would feel blessed to receive such a card from you. A very Happy New Year to you and your darling husband.

Ooh, it will be fu to see the fresh changes you make to your blog her, Barbara.

how lovely to see you sign up following me again, btw. thank you.

your cards look wonderful. What a blessing you are to those who get those.

Sadly here in States, there is not boxing day normally and so for most its put the holiday decor right away and back to work. no rest for us--that puritan work ethic is still so strong here. ugh.

I was glad Boxing Day on a Saturday as i would have taken it off anyway.

What I really love about your cards is how special and unique each one is for the person you make it for. I think it is a perfectly wonderful way to spend this in between week.

They are all so lovely, you have real talent.

Have fun sorting and organizing this month!!

They are beautiful cards, you have been very busy Barbara.

What a shame you couldn't all be together. Never mind, at least your son, Janie and Rebekah got to visit and there's always next year.

The weather isn't brilliant so I've been hibernating, getting up late too. No excuse, must get back to my swimming as soon as I can.
I'm determined to start scanning our old photos this year. My computer is getting overloaded so I'll have to use my husband's. Need to load the software first. It's never sraightforward is it?

Beautiful cards you must have lots of patience! My daughter makes her own cards too and can whip them up at a moments notice!Nice to have them at the ready for occassions!

These are so nice, Barbara. It looks like you have a jump on cards now for the entire year. I think your idea is a good one of just choosing one thing and focusing on it. I tend to scatter my energy but I've gotten better as I have aged. I think I'm getting old. Via la AGING!!

You have so much talent, Keep it up. See ya next year.

Your cards are wonderful, my friend. Anyone who receives them is blessed to have a bit of your handiwork. May you have a Happy New Year and a year ahead filled with God's best blessings for you and those dear to your heart. ~Adrienne~

What a wonderful talent you have and the cards are so beautiful.

Take-Care and have a "Happy New Year."

Barbara, it has been such a pleasure getting to know you a bit through your blog this year! Thank you so very much for sharing so much of your life.

I am SOOO far behind on visiting due to the holidays, but truly look forward to browsing at my leisure in January.

Many blessings for a joyful 2010 for you and yours!

You make lovely cards, Barbara. It's not surprising that yours was your neighbor's 'best ever'!

Happy New Year! God's blessings to you and Alan and your family during 2010.

Great cards! I hope you and yours have a healthy and happy New Year.

Happy golden Anniversary, yes indeed!! And Happy new year to you too Barbara.

That is so nice to get something
made by a friend, it has so much
more sentiment about it.
I thank you for the comment about Jimmy Dorseys father.
I wish I was a fly on the wall for that conversation.. Ha ha
You seem to have such a lovely family. You are easy to love..
yvonne

Thoughts on Life and Millinery. said...

P{ersonally, I think your card making was a better use of time than housekeeping! Housework can wait...inspiration is fleeting.
Love, love, LOVE your blog.