The end of the Week

I have not posted for over a week it seems, courtesy of my cousin who E-mailed me. She was wondering if I was OK. Gosh, has blogging become a barometer of my life? Well I guess like all of us life gets busy at times and priorities have to come first.

In my corner of the world the snow cleared only to be followed by 24 hours of torrential rain. I was out driving last Monday evening with a friend on our way to Pilgrims Hall and roads were flooded everywhere. On our return journey we took the long way round on main roads rather than the country roads on our outward journey and we were still driving through water in some places. 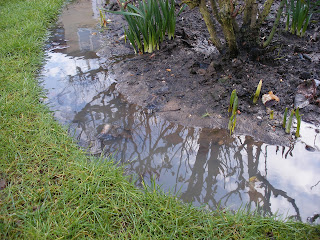 My rose beds had still not recovered several days later, turning to ice over night (the poor daffodills are rotting away) and then we had more snow on Thursday. We are certainly having a cold spell but at least we do not have temps. of 47C and raging fires like they have had in Australia, fairly close to where one of my brothers and his family live. Or prayers go out to those who have lost everything. 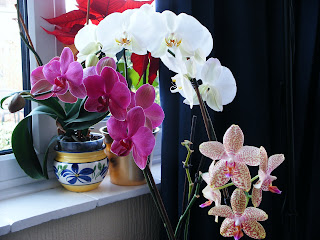 We can pretend it is Summer in the house though. I have some 4 year old Orchids that are in full bud and will soon be as beautiful as these. 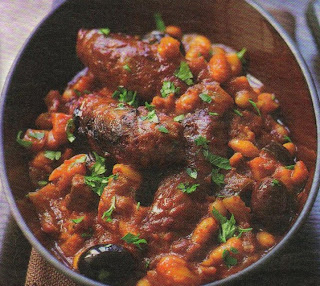 Last Saturday I decided to prepare some 'comfort food' for the cold weather. Part of my reason for trying out this recipe is that I like to try simple and tasty one-pot dishes that will be suitable for cooking in bulk for when I have our house church for a meal.
This Italian Sausage and Bean Casserole seemed to fit the bill accompanied by Rosemary Cornbread.
There was a lot more than sausage and beans in the dish though. There was onion, celery, carrots, garlic, aubergine(egg plant), red wine, Passata and black olives, parsley and chicken stock. I used Polenta for the cornbread and mixed in fresh Rosemary from the garden. 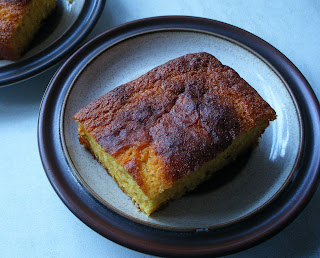 I was interviewed on our national Christian radio this last week, the subject being a combination of faith and love at first sight. It is only when one hears one's experience from someone else's point of view that the reality sinks in.
For those who have not read my story, Alan and I met for the first time at his Mother's house one Saturday evening (his Mother being the sister-in-law of my Aunt). I went to bed that night thinking "this guy is going to ask me to marry him!" Having spent most of the following day together, he did ask me to marry him that Sunday evening just 24 hours after meeting. I said 'yes'. Parents were horrified but we married 4 months later. Three months after that I embarked on an almost year long sea journey as Alan was a Chief Engineer on board ship and this year we celebrate 50 years together.
The faith aspect came about because Alan was not a Christian at the time and as I was lying in bed that first night I heard God's promise to me that he would be. It took 15 years of prayer and intercession before I saw the outworking of that promise to me. God is faithful.

"Weather" of various & severe degrees is reminding us WE are not in control!!! Congrats on being interviewed on radio.
Susan

I wonder what Christopher Robin would have thought of your weather this winter. Usually he just wanted to be out in it :)

My parents met, were engaged and got married in 3 1/2 weeks! To them it seemed normal, but others... I'm sure they would have understood Alan and you. And we are so thankful that God answered your prayers for Alan!

What a charming love story! Congratulations on 50 years and Happy Valentine's Day to you both!

What a wonderful story of God's divine plan for you.

What a lovely story! God is so good!

Happy Valentine's Day, dear friend. Your love story is so special. My sweetheart and I met and six weeks later he proposed. We were married four months after we met, too. God is so good to us, isn't he? ~Adrienne~

Sorry about the weather being capricious. My personal opinion is that once it begins to be warm, it should remain that way. Hope that your flowers, and most especially the roses, will recover.

What fun to read the story of your meeting Alan. It's quite a remarkable story and I'm so surprised by how quickly you knew that you would marry one another. I am glad that the Lord is faithful and that you have been married to a fellow believer for
35 years. It makes a profound difference.

Congrats on the interview...how do you feel that it went?

Great love story and how wonderful your prayers were answered concerning him. Happy Valentines Day!

What a great love story!

It does seem as though you have had an unusually cold winter this year.

Hi Barbara,
Thanks for the comment on my blog. I don’t know a lot about blogging links, etc. but if you go to my February 5, 2009 post at www.friendshiptea.blogspot.com you will see where I talked about your blog and linked to it.
Linda

What a great love story! My hubby and I knew each other for 2 mo before he proposed. Married that same year to my parents delight I might add. They were not the least bit suprised. He is 12 years older then I and I thought they would freak that their 21 year old daughter was marrying a 32yr old but no. We have been happy for 24 years last Dec. 1.

Those orchids are great. I have 2 but I've never managed to get them to re flower :(

.Barbara thank you for sharing your "love at first sight story" and how God spoke to you. It's an inspiring testimony that sparked several encouraging comments from your (blog) followers

What a lovely story of love at 1st sight. :-) Thanks for sharing.

I didn't realise there had been flooding while I was ill. Daffs are very resiliant so hopefully the inner bulb will survive.

Yes those poor people in Australia. There are quite a lot of projects in blogland to help.