A Woman Who Is has come up with a 'bedside table' challenge. In other words photographing the books that you presently have on your bedside table. So having agreed to do this here are the pics. 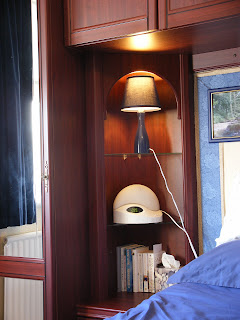 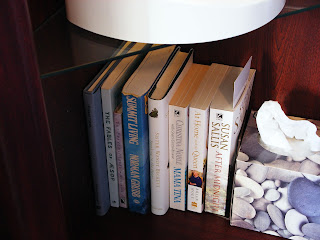 I will work from left to right.
Praised Voices - Compiled by Chris Walton. Over 90 Christian writers from all walks of life have come together from all over the world, to spread the good word through their poetry. My own poem 'The Mind of God' is included in this collection and was awarded the distinction of 'Editor's Choice'.

The Fables of Aesop These and the rest of the brief allegorical tales known for over 2500 years as Aesop's Fables are not just children's stories, but a vital part of our culture says the editor.
The Prayer of Jabez by Bruce Wilkinson. A study on the prayer of Jabez in
1 Chronicles 4:10
Summit Living - Selected Daily Readings of the late Norman Grubb, missionary and one of the founders of WEC International and the son-in-law of C.T. Studd and also a friend of ours.
Speaking to the Heart by Sister Wendy Beckett. A collection of 100 poems of wonder, love, sorrow, laughter, longing, prayer and hope that speak directly to the heart - each with a short introduction.
Mama Tina by Christina Noble. The inspiring sequel to Bridge Across My Sorrows where Christina wrote about the story of her early life as a Dublin street-child. In 1989, driven by a dream and by the memory of her own past, she travelled 6,000 miles to Vietnam. Against extraordinary odds, she opened the Christina Noble Children's Foundation, a haven of food, beds, medical aid and schooling for the street children of Saigon.
At Home with the Queen by Brian Hoey. Life Through the Keyhole of the Royal Household.
After Midnight by Susan Sallis. A sequel to The Pumpkin Coach.One of my favourite contemporary English novelists.
Posted by Barbara at 21:09

That is a very wonderful view in to your personal life. I think we all that blog are a open book.
Patsy

Have found myself wondering today how sore you are from your sledding adventure...

That's a great selection of books...I couldn't take our friend up on the challenge as I have no bedside table...yours is a great setup I think.

To answer your question...my grands have just turned 3 and 2. Yes, time certainly does fly. It goes by so quickly that I can almost hear it.

And it all looks so tidy. Mine never look that way so I am impressed.

We had heard about all of your snow and it appears you enjoyed it to the maximum. What else could one do???? Complain???

Thanks for sharing your bedside reading with us. It all sounds so interesting. Is your poem somewhere on your blog? Did I miss it somehow? Congratulations on your award. ~Adrienne~

Thanks for the"transparent" look in your bedroom!

Very interesting reading, Barbara! I wish I had more time to read! Your booktable list is enticing.

This is such a wonderful idea. I saw it on In a Garden's website and read your comment, so popped over Barbara to see your nightstand. You have some very interesting reading there. A good selection to choose from before sleepy-sleep time...

I'm posting about this too. Excellent idea.

Thanks for participating in the GIVE AWAY. What an interesting selection of reading material you have. You know I just realized as I copy all these posts onto my blog, I will be able to check back and use this as a great reference for my own future reading adventures.

By the way London's giant snowball made it on our news. I couldn't help but think of you and all your fun!

Wow! That has to be one of the more interesting challanges I have seen yet!

I just love books! I love the way they look, feel and smell...and of course I love to read. I lose all sense of time in a bookstore or library.

The Mama Tina book is great. Thanks for sharing.

Very interesting. I have taken your advice and posted farm and snowy pics.

I love to see books around!!! My home is filled with them!

I'm Fran and you couldn't find where to get the code for the What Kind of Reader Are You? The HTML was in a box after I completed the quiz and I cut and pasted it into the HTML part on Typepad. I assume Blogger is similar. Try again--and thanks for visiting.

Hello Barbara.....
I have enjoyed the privilege of a peek at your bedside table...... A great selection..... I can well imagine you being tucked up warm and comfy in bed and being spoiled for choice as to what book to choose. Marion

Thank you so much for stopping by! I enjoyed your snow posts and, of course, your nightstand challenge. What anice collecton of bedside reading. While I was here I enjoyed a few of your date scones and a cuppa tea, thank you!