Thanks for your Concern

So many of you have been asking about my garden after our recent storm, and in view of the horrendous flooding in the UK at present, many have asked if we are OK.
Yes, we are fine, thank you. We are not in a flooded area and we do feel so for those who are. Hundred's of thousands are without running water and have no electricity. Thousands of homes severely flooded.
There are still flood warnings out for towns along the Thames river to the West of London as the water drains down from higher ground and the water surge builds up on the river and more heavy rain is forecast on Sunday.
The Red cross have been handing out food parcels and the Army has been delivering water to specific locations. Apparently nothing like this has been seen since war time.
So our prayers go out to all affected.
As for my garden, I have had to severely prune some shrubs. The damaged leaves are beginning to curl up and turn brown so I imagine this will affect the Autumn colours.
Even though the leaves are badly damaged on some of the roses, they are coming into their second bloom of the year.
Also there are parts of the garden that were not damaged by the flooding and hail storm. 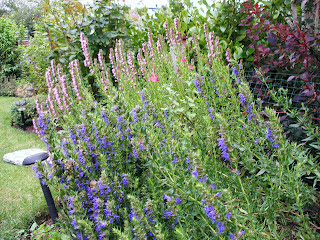 See here the pink and blue Hyssop in the herb garden. Hyssop was used in Biblical times to paint the the doorposts in blood. 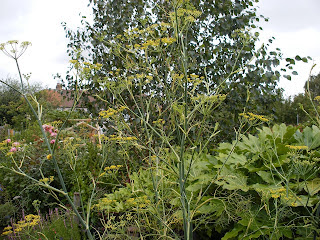 Looking through the Fennel 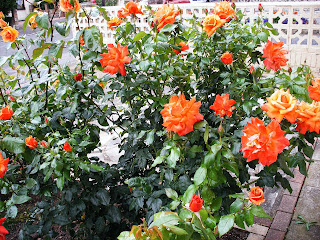 Second flowering for a Rose that was sheltered

Glad to hear that your home isn't involved in the flooding. I've been in places in the states with floods-a difficult time.

I am so happy that your garden is recovering from the storm.