Life, Holiday and Everything Else In Between!

It's over a month since my last post and I have been trying to rectify that but as we know sometimes life just takes over!
Apart from being busy with so much going on, (both good and bad) we have recently returned from a very peaceful and relaxing holiday. Nearly 600 photos for a week (it's OK I will not be posting them all, but will be posting some of course!).
A lot of my IT/Computer time has been taken  up with my I-pad. Having had my computer wiped last year I was devastated to have the same thing happen to my I-pad the day before my holiday.
This all happened because I wanted to transfer my music library (which I had taken a year to upload again since the wipe-out) onto my tablet to take away with me. I-Tunes would not allow me to do it until I  upgraded to I.O.S. 9 from 8. In trying to do this it would not accept my password and user name and because one is only allowed an allotted number of tries my tablet was disabled by Apple.
I was horrified to learn from the Apple store that the only solution (because of security) was to have it wiped clean and taken back to factory settings. I was horrified. Added to that the i-pad was not backed up in the Cloud. I had not known that one had to set the tablet to do this.
Having taken almost a year to get my computer back to where it was I was ready to throw the whole thing out of the window!! Like with all of these things I did not know exactly what I had lost until I came to use things.
The biggest loss was around 5,000 photos. Some of these photos were on my computer but not all and the hardest thing to accept was all the videos of my Grand children. Those golden moments when one just had the i-pad to hand and starts shooting! The 1,000 songs did not matter as I had just finished loading onto my computer from C.D.'s.
Apps can be downloaded from the Cloud as they automatically stay there (there were 45 in all) but all had to be re-registered etc. One of my favourite Apps, the Glo Bible, for which I paid £25, will not allow me in except for the basic Bible text therefore not being able to access the thousands of Biblical photos, interactive tours, maps and videos, even though I have it on my computer. Fortunately my documents are still in the Pages App. I am not talking about games apps by the way but useful things like Maps, Kindle, Google Earth, Facetime, Calender, Weather, radio, etc. etc. etc.

At the same time I had a very genuine looking E-mail from my provider telling me that my mobile phone was to be cut off the following day because of not being able to process  my payments. It turned out to be a dangerous Spam trying to get all my bank and security details.
All this after a neighbour crashed their car backwards into the front of my house before abandoning it!

Well I am sure that You have had enough of this so I will end on a pleasanter note by posting the following pictures of the October roses that greeted us on return from holiday. 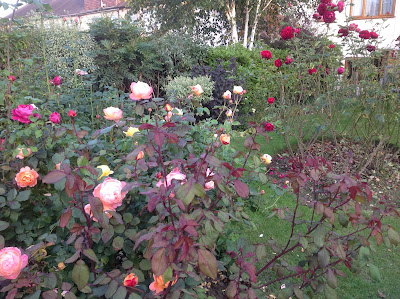 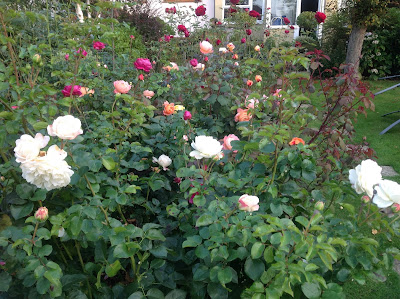 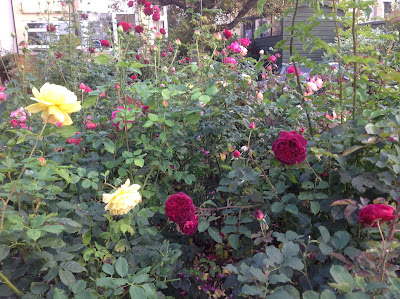 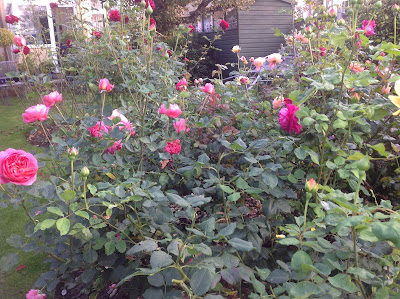 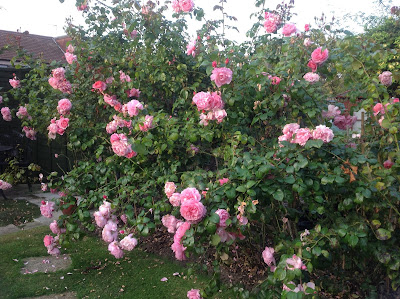 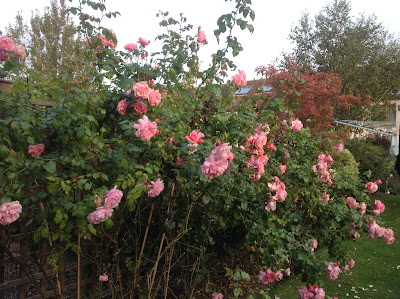 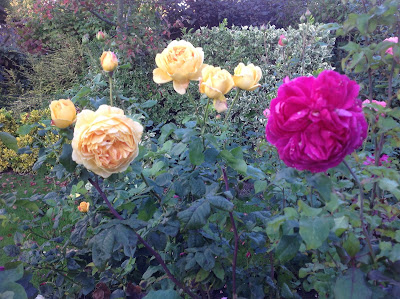 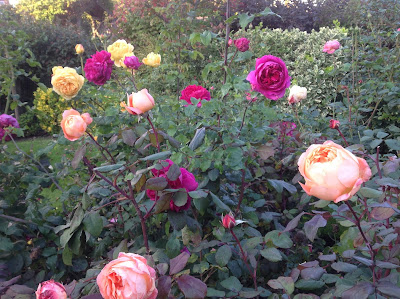 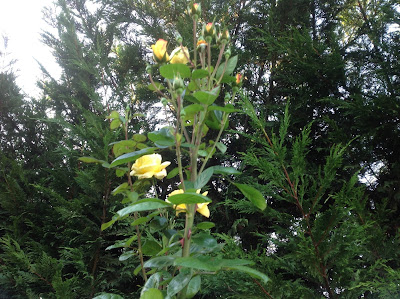 This bush was over 7 feet high!
Back soon with holiday pics

Labels: My Garden, My Life

Well, your roses are lovely even if everything else was horrible.

I have been furious with Apple after the recent update messed up everything. I keep telling John that I am going to throw it on the floor and stomp all over it and, believe me, I would not be replacing it with an iPad. John's Kindlefire is 1000 times more stable. Now I am furious because of all you have been through. Losing the videos of the grands, the apps you purchased, and the frustations of it all. Thank you for the beautiful photos of your rose garden. They helped get me calmed down. =D I was excited to see a few buds on my rose bushes, but I think that the frost will get them. Looking forward to your holiday photos!

No wonder we haven't seen you in a while! That is certainly a lot to manage all at once. I am looking forward to hearing about your holiday. I do hope it was especially enjoyable after all the other things going on in your life. Lots of love, Sara

Lovely pictures. I sure hope you get all your troubles with PC and I pad straightened out. I work on my PC daily and I always seem to worry and hope that everything goes just right. I was luck at the end of last year when my PC broke down that I didn't lose anything and it all got saved and is now on the PC I now have. Wishing you all the best.

Mercy!!! Life can be challenging, and I am so sorry for the frustrations and house wrecking that have plagued you Barbara. I have spent HOURS trying to resolve computer issues, and I appreciate your cautionary tale. I need to transfer my photos onto sticks or another drive. You are very generous to share your beautiful photo bouquet of roses with us. Thank you! xx

I echo the other Elizabeth.
Computer woes can be utterly frustrating - but the loss of the videos of the children must be really
upsetting.
I think saving to 'the cloud' is probably worth it.
Roses looking blissful
and I look forward to your holiday photos.
I have missed you!

That's such a shame Barbara. Losing photos & videos is losing memories & you can't replace them.
I'm obsessive about copying them to Google, One Drive & onto a separate hard drive. They're all over the place. I recently upgraded my husband's laptop to Windows 10 & eventually had to have the hard drive replace. The upgrade might have had nothing to do with it but it's such a coincidence. Luckily there was very little that hadn't been saved to One Drive. Technology is great but you just can't rely on it.
You certainly have had a spell of awful times which is hopefully over now.

I sorry to hear of all the mishaps you've had to endure. There are times I wonder if adding technology to our lives is a good thing - then I remember that's the way I met you here! Hoping for better days for you and enjoying your beautiful garden again.
~Adrienne~