St. Peter's on the Wall

Whilst out on a ramble (in the time before my digital camera)
how long can that be!
we visited St. Peter's on the Wall - an ancient chapel on the edge of the marshes looking out over the North Sea.
It is said to be the place where St. Cedd brought Christianity
to England.
See some history at the end of this post 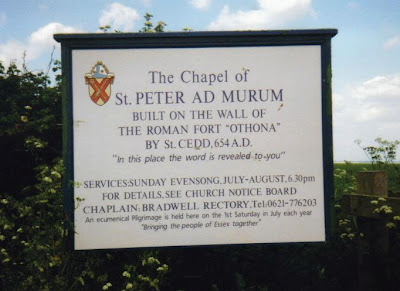 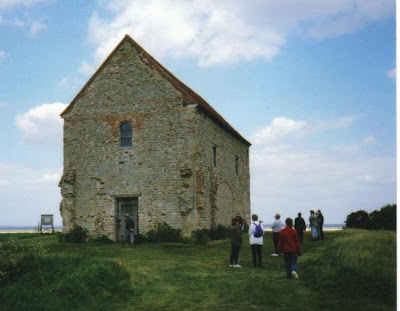 The chapel is still used today 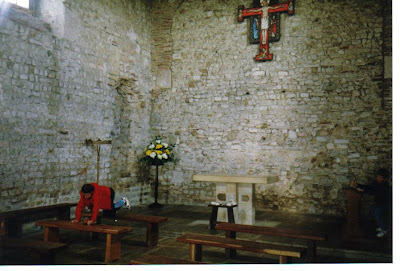 There were children on the walk with us finding a different way to occupy themselves! 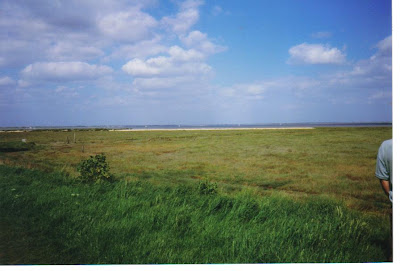 654 Cedd founded a Celtic style community at Othona, built his Cathedral of St Peters on the foundations of the Roman fort and was consecrated Bishop of Essex. In fact Cedd's Cathedral was built where the gatehouse of the fort had been - so it was built on the wall of the fort - hence the name - Saint Peter-on-the-Wall.


664 Cedd died of the plague at Lastingham in October. Soon after the death of Cedd, Essex was taken into the Diocese of London and St Peter's became a minster for the surrounding country.


1068 The Chapel became the property of the Benedictine monastery of St Valery on the Somme.


1391 The Chapel was sold to William of Wykeham.


1750 For many years it was used as a barn for the storage of grain and shelter of cattle.


1300 years ago there were people working in Ireland and Scotland to spread the Christian faith. In Ireland, Patrick had established many monasteries and from there Columba had come to Iona, a tiny island off the west coast of Scotland, to establish a monastery and many other Christian centres.


From Columba's monastery, a man called Aidan was sent from Iona at the invitation of King Oswald of Northumbria to set up a monastery at Lindisfarne on the north-east coast. It was also to be a school where Anglo-Saxon boys could be trained to become priests and missionaries. It was in this school that Cedd and his brothers Caelin, Cynebil and Chad learnt to read and write in Latin, and learnt to teach the Christian faith.


The four brothers were all ordained as priests and two of them, Cedd and Chad, later became bishops. Cedd's first mission was to go to the midlands, then called Mercia, at the request of its ruler, King Paeda, who wanted his people to become Christians. Cedd was so successful that when King Sigbert of the East Saxons (Essex) asked for a similar mission, it was Cedd who was sent.


So in 653 Cedd sailed down the east coast of England from Lindisfarne and landed at Bradwell. Here he found the ruins of an old deserted Roman fort. He probably first built a small wooden church but as there was so much stone from the fort he soon realised that would provide a much more permanent building, so he replaced it the next year with the chapel we see today! Cedd modelled his church on the style of churches in Egypt and Syria. The Celtic Christians were greatly influenced by the churches in that part of the world and we know that St Antony of Egypt had built his church from the ruins of a fort on the banks of a river, just as Cedd did on the banks of the River Blackwater in Essex (then known as the River Pant).

Cedd's mission to the East Saxons was so successful that the same year he was recalled to Lindisfarne and made Bishop of the East Saxons. His simple monastery at Bradwell would, like those at Iona and Lindisfarne, have been at the same time a church, a community of both men and women, a hospital, a library, a school, an arts centre, a farm, a guest house and a mission base. From there he established other Christian centres at Mersea, Tilbury, Prittlewell and Upminster.


Cedd often visited his northern childhood home and in 659 was introduced to King Ethelwald who asked him to establish a monastery in Northumbria. Cedd chose a site at Lastingham as it was wild and seemed fit only for wild beast, robbers and demons. Again this was exactly how St Antony of Egypt chose his sites. In 664, while at his monastery in Lastingham, Cedd caught the plague. As he lay dying 30 of his monks from Bradwell came to be with him. They too caught it and one young boy survived and returned to Bradwell.

How wonderful that restoration was made and it is still being used. I must say they built to make things last in those days. Nothing built today could compare. Thank you for sharing those bits of history today. I do so enjoy them and the pictures.

Oh I just lost a comment, I think. If this is a double, feel free to delete. Was just saying that I had never heard of Cedd so this was all new and interesting. I was also saying that John's ancestral home in Scotland looks a great deal like this building...tall and built of stone.

What an interesting story. I love coming to your blog to discover such history. It is really amazing to think of making such a journey back in those days.

Completely fascinating! I love England and its history! After recently discovering my English lineage back in an unbroken line to the early 1100's,(assuming it's all correct!) I find it even more fascinating! I'm sure I will re-read this post again! Interesting. Blessings!

I love this post, it is so interesting. The history of this chapel is amazing. Thank you so much for sharing your adventures. Likely, I would never have seen the picture or read the history, except for your post. Many Blessings.

There is so much fascinating, and very old, history around you, Barbara! I was inspired to find Bradwell on Sea on a map to see how far it is from London.

What an interesting history lesson Barbara. I love the simplistic beauty of the chapel.

Have a blessed weekend. Marion

What a splendid little chapel --reminds me of the one at Heron Hall in Herongate that was also used for many years as a barn.
I echo what all the other commenters have said about coming to your blog for lots of historical details.
Hope it's getting a bit springlike in England?
Still too cold here!
Hope you and Alan are keeping well.

Thank you again for a most interesting journey through time. Thank God for those who faithfully labored through tremendously difficult times to spread the knowledge of Christ. When I read stories like these I am so impressed with how much was accomplished during their lifetime. What zeal and fervency and our lack of it with all the ease and comforts we have today.