Say No to Snow and Yes to Tea 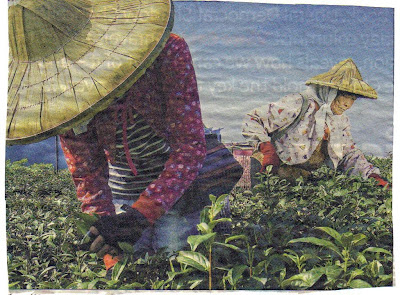 Funnily enough, I have just been reading a book on the history of the East India Company! I find tea really warms me up in cold weather, yet in summer it is quite refreshing!

Fascinating information. I never knew that tea was smuggled into India to be grown there. I'm a tea drinker - Twining's Earl Grey is my favourite. Never milk, just a bit of sugar.

Thanks for sharing. I hope your weather warms up a little soon. We're having rainy days that have the Olympic organizers a wee bit concerned!

We've been getting some information and seeing some pictures of your storms and blizzard conditions there in Europe. I think God is "saying" something in this World Wide cold spell!!!!!

I'm not much of a tea drinker. We are coffee drinkers but I do enjoy a cup from time to time. Retha sent me some red tea from South Africa that is the best tea I've ever had. Nothing like we can buy here.
Susan

Fascinating and if I ever run across this book, I will pick it up. No milk in tea here, but your points about preparing the pot and fresh water just at the boil are well taken. My favorite tea is a black breakfast tea and probably because it's more like coffee. Still, I'm loving a honey chamomille tea in the afternoon...very soothing. What's your favorite? (Oh, I have tried white tea and was unimpressed.)

I love my coffee, but I take a tea break everyday. I have never had white tea, so I must try some. I just recently started to drink green tea. Still have to get used to it. I love earl grey, peppermint, rosehip, and chamomile teas.

Fascinating!!!! I had NO idea.

I will now enjoy my cup of tea even more. Hopefully, we will be brewing some tea here this week as we are forecast to finally get a little rain. Tea on a rainy day will be perfect.

Very intersting information, Barbara. I have read some on the Opium Wars but never anything about Tea in China. I have some white tea in my cupboard which was given to me as a sample by the woman who owns All Things Tea in my city. She is a tea master and runs both a little shop for the everyday tea drinker and an online store (tealiteful). I haven't tried the white tea; when I do, I'll tell you what it's like.

I do love a good cup of tea but rarely use the loose tea. I grew up with tea bags. I do like Earl Grey and English Breakfast tea. I use the pot for brewing when I'm not rushed for time, otherwise it's in the cup. It is fascinating hearing about all the different teas. I do love my coffee too and start the day with that and usually end the day with tea.

This was quite interesting and informative. I love your new picture for 2010. You look great. I drink coffee in the morning and hot tea in the afternoon.I must try your recipe for tea. Sounds yummy.

You guys have really had it bad over there. Nice visiting with you! Stay warm.

This is prime tea drinking season here for me too. One of the many things I adore about England is the art of drinking tea. I love how your culture is built around having a good cup of tea.

I love your strong black teas with milk and sugar. When I visited England I discovered in one of the B&B I stayed in Lady Grey. I am able to get that decaffeinated here in specialty markets, and since it is such a light tea, but very floral, I drink it with out the milk sugar for my before bedtime cuppa. As always I enjoyed your post.

Sorry you are smothering in snow!

Fascinating Barbara. When the children were little we would settle down and have our own afternoon tea. It was a time to relax and chat together and then have a story. Even now they like tea when they come in.

HELLO BARBARA,
Absolutely fasinating. Such a
story. Great name for a Book.
I am so bourgeois, I use tea bags. Lipton ,Bigelow constant Comment, I also liked the irish breakfast tea. My Grandmother from
England used a ball w/tea leaves in the pot. She also
prentended to read tea leaves.
I was mesmerized by her.
stay warm it's zero this A.M.
yvonne

Thank you Barbara, I am going to have a cup of tea.
Patsy

I've been following your blog and enjoy it a lot. I'm across the pond but have always been fascinated with the English, their history, books etc. Unfortunately I've never been there. Mary H

Thank you for all this great information - living where you do -you have all the inside scoop!

I use loose Assam too... love it. I was also given some White teabags for Christmas. It's very nice, similar to green tea with a high caffeine kick.

Interesting! Think I need to have a cup of tea! ~Adrienne~

You have a great blog here. I like checking out travel blogs much like yours at times. I have a blog myself which I hope will be a great resource for those looking to go on vacation. I want everyone to get that "vacation feeling" every time they come to my site. You know what I'm talking about.

I'd like to exchange links with you to help spread some traffic around between each other. Please let me know if this is possible. Until then, keep up the good work.

I love tea! very little milk and sweetened but especially in a china cup!

Love your blog,enjoy reading,your pictures are amazing and your garden is too.

Wow, very intriguing! I never knew there was such an adventure behind tea!

My husband likes the cut tea leaves from a wonderful little tea house right in our home town.

My favorite cut tea is called Savanah and has chocolate, almond and vanilla.

Thanks for telling us such an interesting story.

Blessings to you in the New Year!

Wow, you are surely very knowledgeable regarding tea! I love to drink tea too.

Thanks for your visit to my blog and your encouragements. It's nice to get to know you. I noted that your blog is an Award Free and Tag Free blog. But I just want you to know that I have added you to my list of blogging friends whom I am sharing the More Than Conquerors Award as you too are more than conqueror through Christ Who loved you! I am encouraged by what you shared on your profile "For me, Christianity is not a religion but a life. A life lived dependent on the reality of Christ within." Amen!

I love the photos you took too. They are so beautiful. I wish you a very blessed and wonderful weekend!

What a remarkable post, Barbara -- I enjoyed your summary very much! I've often heard reference to China tea as opposed to India tea and wondered why some was from each area -- can they not be grown in both areas? Now I understand better. Thank you.

A very interesting history, of which I knew nothing before reading your post! Fortune was fortunately named, don't you think!!

These days I think my favorite tea is Green Jasmine tea from Trader Joe's...it comes (dare I admit it) only in teabags, however...

I came to your blog from Sara's and enjoy seeing your photos, and this post on tea! Believe it or not, one of our favorite teas is PJ tips (sp?) which we still have a good supply of from our last trip to Worthing, where we have spent time. Last spring we saw marvelous tea fields in the Kenyan highlands, and it was a truly beautiful scene!

How incredibly fascinating! didn;t knwo all this. Some but not all.

Thoughts and Events of the Day said...

Tea was described by Hazlitt as the beverage that cheers but doesn't inebriate. Apparently tea is very health giving. Its got a lot of powerful anti-oxidants. I drink a lot of green tea. I buy it in leaf form at H&B's in Romford

What an interesting post!Thanks for sharing all this info with this tea lover!Blessings~Sharon