I had always intended to do some posts on our Siamese cats and having shown a calligraphy version of a poem written for our cat Sandy, my daughter Janie suggested I post a picture of her. So here goes, the first in a couple of cat posts. 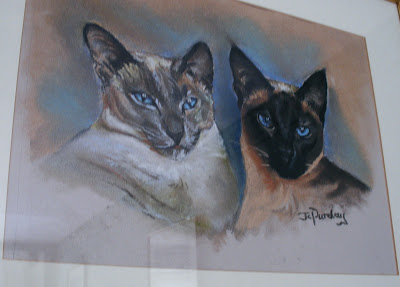 This is Sandy on the right, her pedigree name Zarabelle Zavita ( a Seal Point) shown here in a pastel drawing by John Purday, the son of a friend of ours. Here she is with her Mother Misty, pedigree name Anabelle Stasia ( a Blue Point). Sandy, the daughter died first aged 13 and the poem I wrote was part of my grieving for her. It was amazing how much I loved and missed this cat considering my previous life long hate of such animals.


The story began in an unusual way. It was 1978 and my children who were then aged 10 and 8 had been asking for another pet (they already had rabbits and guinea pigs) preferably a cat. A cat was the last thing I wanted in my home as I saw them as smelly and unpleasant.

Then one day we received a telephone call from a friend saying she had a cat for us as she knew that Peter and Jane (our children) had been praying for one in Sunday School. This was the first we had heard of the praying and although we did not want a cat we felt we could not deny our children's answer to prayer. So, we reluctantly agreed to have Misty, a beautiful blue point Siamese cat. The reason she was available was because she had been a present to her owner but with a baby in the house at crawling stage, our friend felt unable to cope with this new cat.

So Misty at 7 months old was delivered to our home. Rules were quickly made. This cat would never go upstairs and certainly not into the bedrooms. What would we do with her at night? My first thought was to make her comfortable in our garage cum store room. This is integral and is not used for a car so has a carpet on the floor and seemed the ideal solution. We supplied Misty with a comfortable basket, with a hot water bottle, a litter tray and water. What more could a cat want? At bedtime, in she went and the door was closed. Remember that at this time I am a novice as far as keeping cats is concerned and I still don't like the idea of one prowling around my home.

The next morning on opening the door she had vomited in one corner, pooed in another and wet in another. This confirmed my feelings about cats. Seeing my children's distress I decided to quickly get hold of some information on the behaviour of cats (no internet then). I found out that this was typical behaviour of a distressed cat. So what do we do now? That night I allowed Misty her freedom as long as all bedroom doors were closed. In the early hours of the morning we were woken by a commotion outside our bedroom door. There stood our children upset because Sandy was 'crying' and trying to get into their rooms! So, that was the beginning of giving the cat freedom of the house including the children's bedrooms.

Needless to say, within a week I had fallen in love with this cat. She was beautiful, loving, had a very pleasant perfume and loved to sit on my knee and purr. I was smitten and Misty became a very important member of our household.

There will be more cat stories of Misty and her 7 kittens when we decided to mate her in the next post.

My first and very favourite cats. I remember the night Misty was first given her freedom, and how I felt when she leap onto my bed, and then snuggled down to sleep for a while. Never thought other cats could replace them, but Oscar and Emmy are my little babies now. Oh so different, but very much loved all the same.
Will look forward to seeing some more stoires of our beautiful siamese cats.
xxxx

What a fun introduction to your dear kitties! Mine is on my lap, purring and snuggling, as I write. Looking forward to more stories. ~Adrienne~

We have had several of the blue point siamese and have loved them. They are so talkative and affectionate.

I loved the story of how Misty became a house cat. Too funny!

There's something about a Siamese. I've been fortunate to have two. One as a child and one as an adult and they are like no other cats. God must've really made Misty special because people who don't enjoy cats rarely come to because of a Siamese. :D

They're beautiful! I have never owned a cat, and so have never been accustomed to them. Hearing posts such as yours, melts my heart a bit. What joy Misty brought to you!

We had a seal point siamese cat when I was growing up and her name was Mia. She was like a human in our house.

I've never been much of a dog lover. But if I were to have another pet it would be a cat. I've loved the ones we've had in the past. Our pets at this junture of life are honey bees and birds of all kinds and varieties.
Susan

Hello Barbara,
I came across a fun fact about cats having 32 muscles in each ear.
Can you imagine that?

Blessings to you,
~Deanna~
From HomeHaven nestled in the Kansas Flinthills

I do know how our cats snuggle in to our hearts!

I am so glad you have taken to writing us a story again from your life. I love this one already. I could see this as a children's book, illustrated by you of course.

I just took a gander through your bluebell photos...oh my! I saved a few of those for perhaps some future paintings. I loved some of the compositions. I must say your country is beyond charming!

Hope all is going well with Janie? Meg is pretty tired this week, as to be expected. Me too! lol

Cats! They actually do own your house!

I was truly there on the bluebell walk.
What a delight.
I remember picking bluebells in Thorndon Park - -however they always bent over and looked a bit sad in jam jars.
Loved the cat story. Yes, more please.
Very clever of the children to pray for a cat......and let their prayers be known.......who could resist?

Cats are very regal and this portrait only proves it more. I once heard that we don't own cats; they own us. True?

A pleasure to meet you.

My cat is Elliot. He's 13 now but still seems as lively as ever. He's been a good companion.

I adore cats, we always had at least one when I was a child.

Your cats are beautiful. No wonder you came to love them and make them members of your family.
I often think cats own us instead of the other way around!

What a beautiful picture. Lovely memoies too. They steal your heart. Look forward to more!

Have a friend who recently lost her dear brother to cancer. I recommended your blog about your beautiful cats since she is a cat lover and they bring her such joy.We never know who our stories will reach. She loved it. She is a lovely Christian woman, I hope to help her start a blog.

We have always had cats, from my childhood on. I loved "my" cat of the hour very much when I was a youngster. Once in a Sunday school class when I was about 9 the teacher told us we could not be Christians unless we loved God more than anything else...so I decided, with a child's complete honesty, that I could not be a Christian because I loved the cat, Charlie, more than anything else!

Barbara, you have been given yet another award!

They are such beautiful animals- a friend kept Burmese cats.

I can just imagine your face that 1st morning. :-) I think mine would've been the same. Dogs somehow worm their way into your house/life and heart too in a similar way.