Images Along the River

Yesterday was such a beautiful warm day that I just had to go out and make the most of it. Having just posted on a recent walk over the marshes when the weather was cold and drizzly, I thought it would be nice to go back and walk along the river this time.

I don't know if the Cherry and Almond Cake at the Visitor's Centre cafe had anything to do with it!

We began our day with coffee in the cafe and then walked along the river towards London. It is so tempting when doing this kind of walk to just keep walking and see what is around the next bend (which we did to a point) but one has to remember that one has to walk back, and I also wanted to walk in the other direction too. So, having walked for an hour we turned around and made our way back to the cafe for lunch. While having lunch we can watch the birds as the cafe faces the marshes and is raised up with large glass windows.

After lunch we headed off in the opposite direction towards the estuary. My photographs are taken looking both ways up and down The Thames as we walked.

We will be walking for almost 7 miles today so it that is too much then just enjoy the sights. 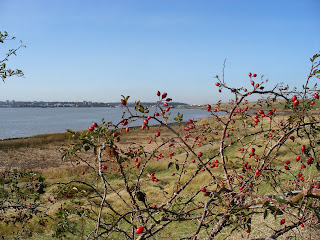 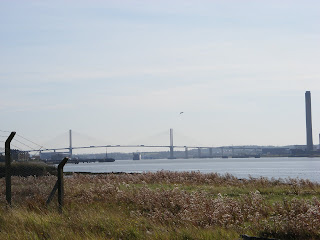 Looking back at the Queen Elizabeth II bridge 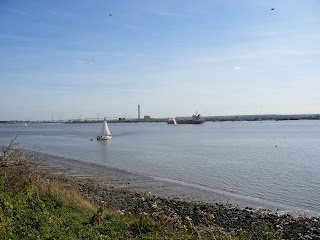 The river is pretty quiet 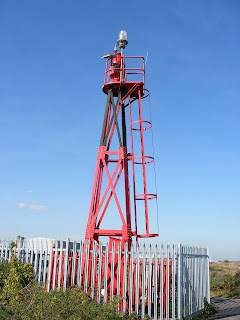 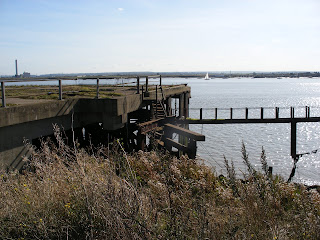 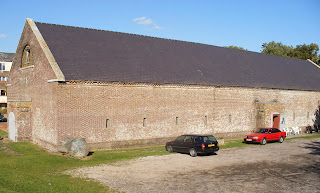 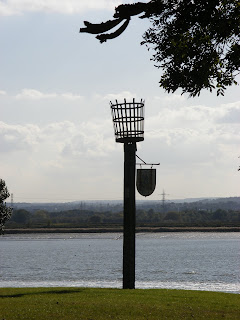 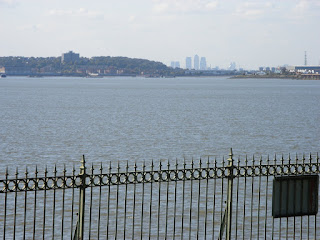 Looking towards the city 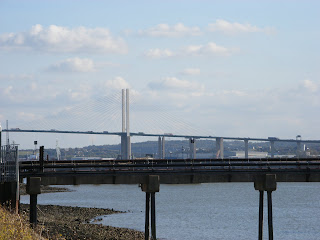 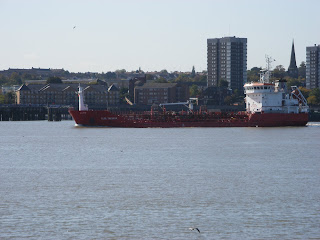 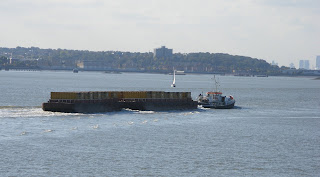 Containers being taken down the river rather than by road 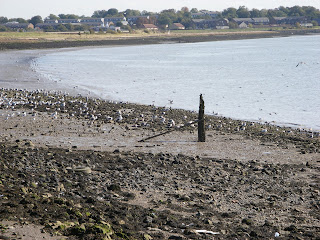 The Gulls awaiting the tide 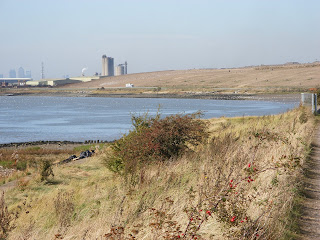 We are looking towards a landfill site 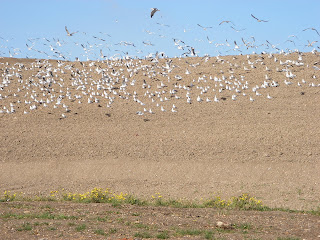 Where the Gulls are waiting for something!
We did go back to the cafe before returning to the car park
and guess what for?
I bought some Almond and Cherry Cake to take home.
When I told the waitress how much I enjoyed it she told me that all their cakes are home made on the premises by one lady

I enjoyed this walk too.
So glad they had the cake.
The cake lady should go into business so she can supply you all the time......!

You two have been eating your Wheaties in addition to the cake.

Doesnt that cherry cake sound good after a long walk!

I've been dreaming about that cherry and almond cake. I'm glad you bought some to take home! Cut me a nice big slice, please!!

What a delightful walk and a long one too! Good exercise and sights and that cherry cake sounds yummy. Me and my grandfather love cherry pie!

Another wonderful walk- thank you. That cherry cake must be good! :-) It's beautiful to see that there are wild places close to London.

I'm not much of a cake person, but that almond cherry cake sounds so heavenly--I can almost taste it.

A beautiful, peaceful looking walk! I envy you your cake--I actually went online in search for a recipe after your last post ;-)

Hi Barbara, I enjoyed this walk...all those distant views and the river and the gulls...perhaps one of these days I will go down to the port area here and take photos, we have tons and tons of those cargo containers!

Exquisite pictures, I really enjoyed the walk, now if only I could get a bite of one of those sweets! :-)

I like to accompany your walks, whereever they are. And I have just seen for the first time your new layout (or should I say header). The flower collage is beautiful.